The Entiat Mega-Slam is a peak-baggers traverse of nine of the top 100 tallest peaks of Washington State, known as the Bulgers List.

(Warning: this is not a casual trail run... it involves route finding, very loose 4th class terrain, steep snow, heinous bushwhacking, a serious stream ford, and one of the most beautiful experiences in the state)

If you attempt this FKT, please strongly consider donating money or volunteer time to Washington Trails Association who does the stewardship for these trails.

The nine peaks may be done in any ordered but the time starts when you leave a trailhead and ends when you step into the final trailhead, and you must stand on the true summit of all nine peaks in between (geo-tagged photos on summits, please).

Jason Hardrath (IG) and Nathan Longhurst have both speculated that this slam could go as fast as 48 hours - maybe better if one doesn't sleep. 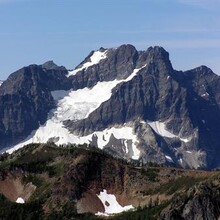 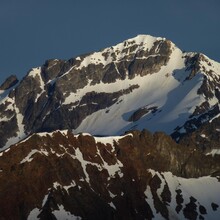 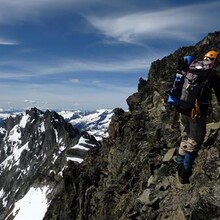 I don't think this route respects the FKT submission guideline:
"Routes that simply link 2 notable features or sites usually won't, because there are too many (i.e., infinite) possibilities."

This route will likely only be attempted by people going for the overall Bulger list FKT.
Since this may not be the optimal route I doubt it will see repeats. For example, it's probably worthwhile to go from Fernow to Copper avoiding the Lake Chelan ferry to Lucerne as well as a bus to Holden thereby saving a day of travel.

Routes that are attempted regularly and could have a competitive aspect are Dumbell and Greenwood, Fortress and Chiwawa

Peter Bakwin and I had pretty extensive conversation about this route before he ultimately accepted it, back before FKT was acquired by Outside. Glad to see others offering up perspective here. Reach out and get in touch, it is a much easier process if I ask them to take my route down that for you to have it removed. So I am willing to hear you out. All the best. Psyched to see the involvement!

I agree with the options you offer up for shorter pushes, regardless of this route being taken down or not.

Brian [and to whomever else it may concern],

As a final update on this, I inquired with the regional editor [Alex Bond, at the time] to put us in touch to discuss your opinions on this route, as I do believe routes should be able to stand up to critical review in the "court of public opinion" and that the route creator is the one who should be able to defend their route. However, apparently they were not able to reach you?

I did receive Alex's opinion in his final correspondence saying, "on the Entiat Issue, I am inclined to disagree with him. I think that route is a cool linkup of a bunch of peaks in the area and I could imagine other people wanting to do that"

I guess I will consider this dialog closed.

For future attempters, fair to assume that this route while being determined worthy of a presence on this site, is not to be considered a premiere example of a great route, in some FKT enthusiasts opinions.

However, I will say, it is one I would do again.

with stoke and gratitude