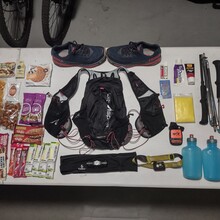 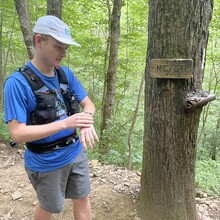 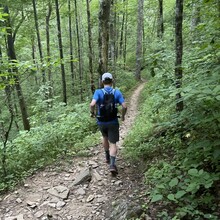 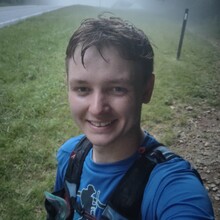 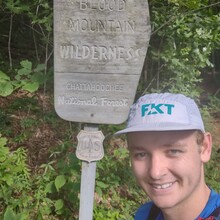 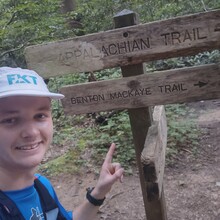 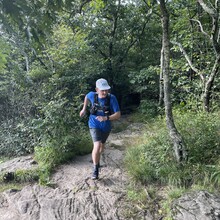 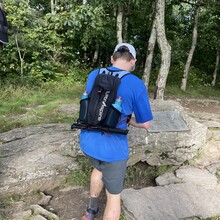 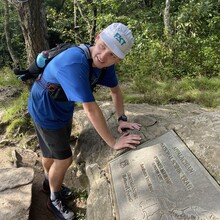 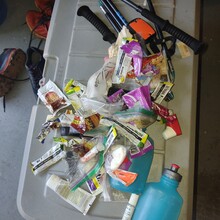 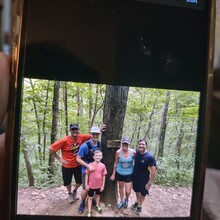 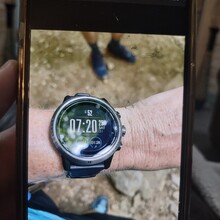 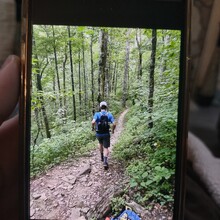 [Editor’s note: While the elevation gain and elapsed time for Hunter’s effort are consistent with the GA AT, the GPX map and distance are not. Hunter states that, as is recorded in the linked videos, he started his watch at 7:20 PM. His watch then failed to connect to a satellite until four hours into the run. We assess that Hunter did complete the route correctly and have elected to verify his effort. You can click on the last three photos to see the time stamp.]

This was going to be my first long unsupported run, unlike my previous FKT on the Benton Mackaye Trail, I won't have the luxury of a crew! Luckily as a adventure racer I'm used to carrying all my supplies on my back for long stretches without any aid from others for days so I was very comfortable with the challenge. I was able to pack everything I need including water/food in my vest all under 9 pounds! I tend to prefer all my big fkts to take place in the spring or fall due to the cooler weather because as you probably know, you can move a lot faster when the temps are lower but unfortunately the only time I could fit this fkt in was the middle of summer... The temps for the day were supposed to be in the high 90s so at the last minute I decided to start at night so I could maximized the night time weather and avoid the afternoon thunderstorms.

On July 31st, I parked at Blue Ridge Gap with my family and made the 3-mile hike up to the NC/GA Border. I departed the border at 7:20 pm and said goodbye to my family and hopefully, within 24 hours, I would see them on top of springer! The first 9 miles down to dicks creek gap are mostly downhill and really smooth running, even though it was at the start I wanted to let it lose. The sun set right before I got to dicks, and I stopped at my first creek to pick up water. I attempted to try a new strategy to these fkts with my water system (what I typically use for adventure races), my plan was to carry as little water as possible (2 bottles) because I'm able to fill up and filter water fairly quickly (within 30 secs). I have these special water drops that filter my water instantly and doesn't change the flavor so I can basically walk by a creek and scope and go without stopping. This strategy would have worked flawlessly (like it usually does) but unfortunately it was way hotter/humid than I thought so I needed to drink twice as much water, so I had to rely on additional creeks that were further off the trail and some of them were completely dried up so I would waste 20 minutes or so running down the mountain for no water just to return more dehydrated. This happened a few times throughout the night causing me to get pretty dehydrated which resulted with a lot stomach issues/ throwing up for about 6 hours. My pace slowed down quite a bit but I knew I wasn't going to quite no matter what happened to me, so I kept moving forward. The struggle about being unsupported is I packed the exact calories that I would need for 24 hours of moving and since I was throwing up most of my early calories, I couldn't just meet up with my crew to give me more food. I knew I had to fix my dehydration so I made the decision to sacrifice pace/time by running more off trail to collect water through the night. In hindsight what I would have done differently was first not run this in the middle of summer or just carry more water.

The rest of the night was more of the same stuff, just taking it slow and trying to recover, I started falling back on the record but I didn't lose focus on my goal and wasn't going to quit, I just had to be patient. The sun finally came up as I hit hogpen gap, where I was suppose to get more water but of course another dried up creek but I kept going. Finally got some water elsewhere and as I made my way down to neels gap I knew this was the time I had to push to claw my way back towards the FKT. Right before my climb up blood mountain, I took my first break of the trip, gave myself 10 mins to empty my back and take inventory of my calories. I did some math on the records and knew I was pretty far behind the overall record and was actually a few minutes down on the unsupported team record as well, I didn't really care too much because I knew my legs felt great and my stomach was finely normal so I decided that I was going to crush the last 50k to the finish no matter what time/pace I ran, I covered up my watch and put my head down.

The rest of the trip wasn't too exciting because nothing went seriously wrong, I was able to run almost the whole thing and it felt like I hadn't already run 40ish miles, all my creek pickups were perfect, the weather was extremely enjoyable. One of my biggest learnings from the trip was the fact that the faster you move the less pain you are in, I know it sounds weird but every time I would stop/walk I would have all these pains in my legs but when I was running fast its almost like my brain told my legs to shut up and I had no pain... So I guess the lesson is sprint like a mad man from the start to the finish... The wildlife was out in full swing for me, unlike the BMT where I saw almost no wildlife in 300 miles, today I came across a total of 3 bears, 6 snakes, 2 armadillos, and a bobcat! However, my favorite wildlife interaction of all time was in the last few miles, I was booming down a mountain with my music on full blast, signing out loud, and all of sudden I looked up and see this large object in the bushes, i instantly thought it was a bear but once I did a double take I noticed it wasn't a animal at all. It was a soldier in full uniform with a gun, and as I took a third look I noticed he wasn't alone but there were about 20 guys within ten feet of where I was, hidden in plain sight. They all bursted out in laughter as I scared the crap out of myself as I basically ran into them without noticing. That experience had me laughing the rest of the way, as I ran those last few miles up springer mountain I was blown away by how my body felt, almost completely fresh and more than everything I was proud of how I stuck in the fight and didn't allow any excuses to come up to get me to quit! I reached the Southern Terminus of the Appalachian Trail, 22 hours: 50 Minutes: 22 Seconds after leaving the NC/GA Border and was greeted my incredible family!!

Thank you for reading my trip report! I'm writing this to address the issue with my GPS data. I made it up to the NC/GA border and my plan was to start at 7 pm but when I went to start my coros watch, the GPS feature wasn't syncing. I sat there for another 20 mins and it still wasn't fully synced but I couldn't wait any longer so I departed the border at 7:20 pm and said goodbye to my family. As I took my first steps from the border my watch beeped and said GPS acquired and I was relieved, unfortunately, it must have lied to me because as I look back on the data, my route on the map from the NC/GA Border to Dicks Creek Gap doesn't show up but the mileage is accurate ~9 miles. I have multiple backup references if this needs additional clarification.