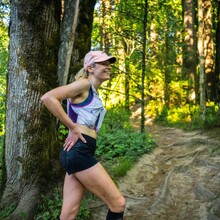 I started at 5:00AM from the Germantown trailhead and did the route in the following order:

Drive to Firelane 2 Trailhead on Skyline

My inspiration for running the Nasties was A) Having some kind of goal to focus on during the pandemic shutdown, and B) Finding a practical way to train locally for running and hiking the entire Appalachian Trail, which I’m hoping to do this summer (depending, of course, on the out-of-state travel situation and park closures–but that’s a whole other can of worms!).

Strategy- One variation I made (outside of the order of loops, in which everyone including me has taken a different approach), was beginning and ending the Alphabet Nasty from the Wildwood trailhead on NW 53rd, rather than the trailhead at Lower Macleay Park. This cut down on driving time significantly, by approximately 10 minutes. I chose to start with the northernmost Nasties, as they have the steepest, most difficult climbs (IMO) and I wanted to get those out of the way early, while my legs were still fresh. This ended up working well, though I had difficulty with running uphill by the time I got to the Alphabet Nasty. The day started off nice and cool, but the sun was out in full force by the time I ran the Flaming Nasty, which lived up to its name. Two 20oz bottles of water were not enough for that route, nor were they enough for the Alphabet Nasty, so I finished the day feeling pretty dehydrated and low on fumes. I took a tumble on the narrow grassy section toward the bottom of Firelane 1, by stepping into a hole that was covered by weeds, but thankfully came out of that relatively unscathed. Other than that, everything was pretty smooth sailing! My friend Steven Mortinson came out to take some photos as I ran through the Newton Trailhead during the Skyline Nasty, as well as at the end of the Alphabet Nasty. He knew the run was self-supported, and took care not to run with/accompany me and knew not to offer food or drinks.

Note on the raw GPS file - I stopped my watch when I drove from the Germantown Trailhead to the Skyline Firelane 2 Trailhead, so it will show an instantaneous jump between the two locations. I forgot to stop my watch when I drove from the Skyline Firelane 2 trailhead to the Wildwood Trailhead on NW 53rd, so it will show some inhumanly fast miles. I split the file into the three separate Strava entries which I linked to, to cut out the driving portions as to not skew the distance of the actual routes.