"Uluru (also known as Ayers Rock) sits within the Uluru-Kata Tjuta National Park. It is the largest monolith in the world with the the sandstone protrusion reaching almost 350m above the surrounding ground level, it is believed that a further 2.5 - 6km of sandstone lays underground. Steeped in indigenous Australian heritage, Uluru is a protected UNESCO World Heritage Site, and climbing the rock has been prohibited since 26th October 2019.

This route starts and ends at the Mala Carpark on the Western side of the rock and follows the base walk in a clockwise direction.

The first 500m of the course run along the Mala walk towards the Kantju gorge, before turning away from the rock towards Uluru road. Following the base walk path along the roadside for a further 500m before the path turns back towards the rock. From here (approx 1.2km into the loop) the route runs eastwards, parallel to the north face of Uluru offset by 300-500m, this is by far the most exposed section of the route and is best attempted early in the day due to the heat. At the 4.6km mark the route turn southwards coming closer to Uluru one again, meeting the eastern point of the rock at the 5km marker. From this point the route stays much closer to the rock offering shade in from the sun. At 7.25km the route passes the path towards the Mutitjulu Waterhole, shortly after this (approx 7.4km) the route take a right turn; this is important as the path straight on returns to a second carpark. Following the right turn, the route continues parallel to the western face of Uluru for 2km back to the Mala carpark.

This path can get busy during the day with walkers, cyclists and Segway tours taking place daily, it is recommended that this run is done first thing before the path becomes too congested. However the Segway tour leaders are good at keeping their party out of the way when runners are coming." 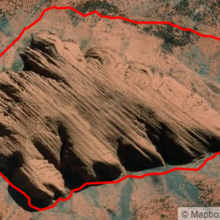