Located in southern Oregon, in the Siskiyou Mountains Ranger District, is a network of trails affectionately known as the Old Fart Trails. Back in the early 2000's, these trails were famous among mountain bikers for their technical features both natural and manmade. Remains of catwalks, dirt jumps, and rock drops can still be seen today, although very few are rideable. Relatively speaking, this network of trails has been left to wildlife and hikers, which appreciate them for their scenery and solitude.

This route begins and ends at the northern end of Bike Wash Trail, at an unsigned junction with Brick Pile Road - 2250. Parking can be found in several pullouts just below where the trail leaves the road. 1/4 mile further are a few campsites on the banks of the Little Applegate River.

Bike Wash Trail follows the Little Applegate River as well. In 0.4 miles, it also makes an exaggerated switchback to explore Water Gulch. This is the first of a dozen or more small creeks which will be crossed along this route. Many of these water crossings are made on sketchy bridges, leftover from the area's heyday. At the southern end of Bike Wash, cross Forest Service Road 200 at a creek-side car camp then proceed up (lower) Middle Earth Trail.

Cross dirt road 2040, going a few paces to the south, then continue up the flowy and attractive Stump Jump Trail. Merge onto Old Man Trail at an access spur that leads to gravel FS 22, just above. Follow Old Man Trail instead to FS 22, avoiding Barrel Ride Trail en route. From the top end of Old Man Trail, follow Forest Service Road 22 for a quick 0.3 miles to PBR Trail, also unsigned.

As you descend PBR, notice the many features that were once rideable. This section undoubtedly had the most hair-raising features of the network. At the bottom of PBR, merge onto FSR 2040 then follow it back to Middle Earth Trail. *(Along this section, you will pass by the top end of Fern Gulch Trail, no longer a trail thanks to clear cut logging. Avoid this trail and ignore this part of the GPX track too, which shows my searching for it.)

To finish, descend Middle Earth Trail in totality then Bike Wash Trail, including the exaggerated switchback up Water Gulch. 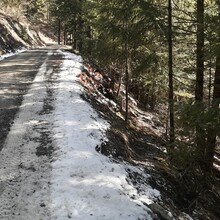 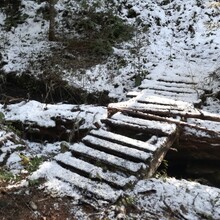 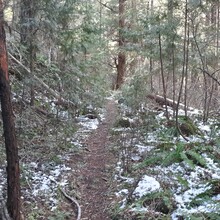 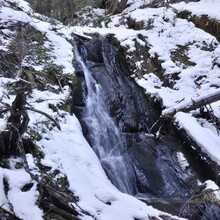 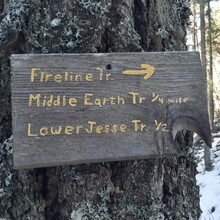 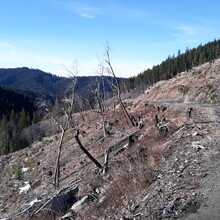