Article: On - How to start a running shoe company (hint: get on with it!)

I first encountered On by eating Raclette.

I had never heard of On; to me it was another random shoe company, based in Zurich, trying to elbow its way into the already crowded running market, and likely to fail. But I had heard of Raclette, which is a national dish of Switzerland, and consists of heating up a large wheel of semi-hard cheese, and scraping off the softened outer layer directly onto each person’s plate.  Equally delicious and dramatic!

The Raclette I ate was served at the OutDoor Show, in Friedrichshafen, Germany, a large industry trade show like Outdoor Retailer in the US.  An observation about trade shows:  In the US, outdoor trade shows are a bunch of guys all wearing short sleeve plaid shirts and bluejeans, hoping to check out cool new gear, while waiting to drink beer with each other.

When I attended ISPO Beijing (the big show for Asia) on the other hand, plaid shirts were not the required uniform; instead the booths had giant monitors, at least 3 meters wide by 2 meters tall, with an excellent sound system, projecting great video. Often they featured near life-size images of friends of mine, which felt wierd since I was in China, but I definitely wanted one of those big monitors.

At a European trade show however, it’s all about food.  They don't make up some faux tech, they don’t bother with silly barn-wood paneling on booths; these companies compete for your attention by serving great food.  Bring it on!  La Sportiva had a complete kitchen in their back booth, another company was serving the national drink “Spritz” (“spreetz”, made with Aperol and Prosecco); but I can’t remember who that was …

At Outdoor Retailer, a loud irritating voice booms over the PA system precisely at 5:45pm: “This Show will be closing in 15 minutes”, and promptly at 6:00 the exits are jammed, people walking out into the hot Denver sun. At Friedrichshafen at 6pm, the party is just getting started.

Same with On.  Not only are they still around, but they are thriving:  3 million pairs sold, distributed in 50 countries, plus an ISPO Product of the Year award.

Is this success attributed to their unique technology, or to serving Raclette at trade shows?

I think both.  Let’s take a deeper dive, because we’ll discover interesting aspects behind what you wear on your feet everyday.

On was born in the Swiss alps with one goal: to revolutionize the sensation of running. It’s all based on one radical idea. Soft landings followed by explosive take-offs. Or, as we call it, running on clouds.

What the heck does that mean?

It means On shoes have open tubes of foam or rubber across the outsole. The tubes provide extraordinary cushion with minimal added weight due to being mostly air, and they operate independently, allowing the shoe to adjust to ground irregularities and the unique pressure distribution of your own running style.  In addition, they have a full-length reflex plate that can provide a rebound effect.

Definitely go to the Technology page on their website for a more thorough and much more cleverly worded explanation (the tubes are “Cloud Elements”; the plate is a “Speedboard”), but that is how I summarize it.

And it makes sense to me! Rather than being entirely revolutionary, there’s some credible and interesting history behind this tech.

The first ‘open tube’ running shoe I saw was a GoLite, if you can believe that.  GoLite had licenced their name to Timberland, a huge US outdoor company, who endeavored to design an entirely new running shoe out of their Massachusetts design shop.  The shoe actually worked well, although with some wear issues, but was too radical for its time, and vanished in a flash.

Then Nicolas Mermoud and Jean-Luc Diard invented the Hoka One-One (about the same time On began).  The former Salomon employees basically invented for running the fat ski, the over-sized tennis racket, the device that makes the sport easier and better for the majority of people.  At the height of the minimalist shoe craze they went maximalist, and it was brilliant.  Ironically, they were both accomplished mountain runners who intended these fat midsoles to allow top trail runners to bomb downhill with greater speed, while their real contribution was to allow the other 99% of runners greater comfort and distance on any terrain, especially roads.  Deckers, the holding company that also owns Teva and others, saw the potential, bought out the two Frenchmen, and Hoka continues quite successfully.

On is in this tradition - finding a superior technology, and committing to it.  They don’t make “regular” shoes; they don’t try to increase sales by looking like what’s in the big box store at the mall - they only do what they believe in. Some people might not like Cloud technology, but it’s their story, they stick to it, and in my opinion, this is the recipe for success.

And don’t forget that “Speedboard” - it’s probably more important than you thought.

Ever hear of a company called Nike?  Their 4% Vaporfly is worn by most of the top marathoners in the world. And it’s not at all minimalist - it has a much larger than normal stack height of 21mm forefoot, 31mm in the heel, so a ton of cushion … and it has a curved carbon-fibre plate in the mid-sole from heel-toe.  Dr Roger Kram’s team, at the CU "Locomotion Lab" (down the street from where I live), verified the original 4% claim, then later testing revealed it was the plate that contributed greatly to running economy.  (The cushioning contributes other positive factors as well, but that is too much to describe in this article).

On earns their name; they are on to something.  Their tech has been proven both in the marketplace and the laboratory. 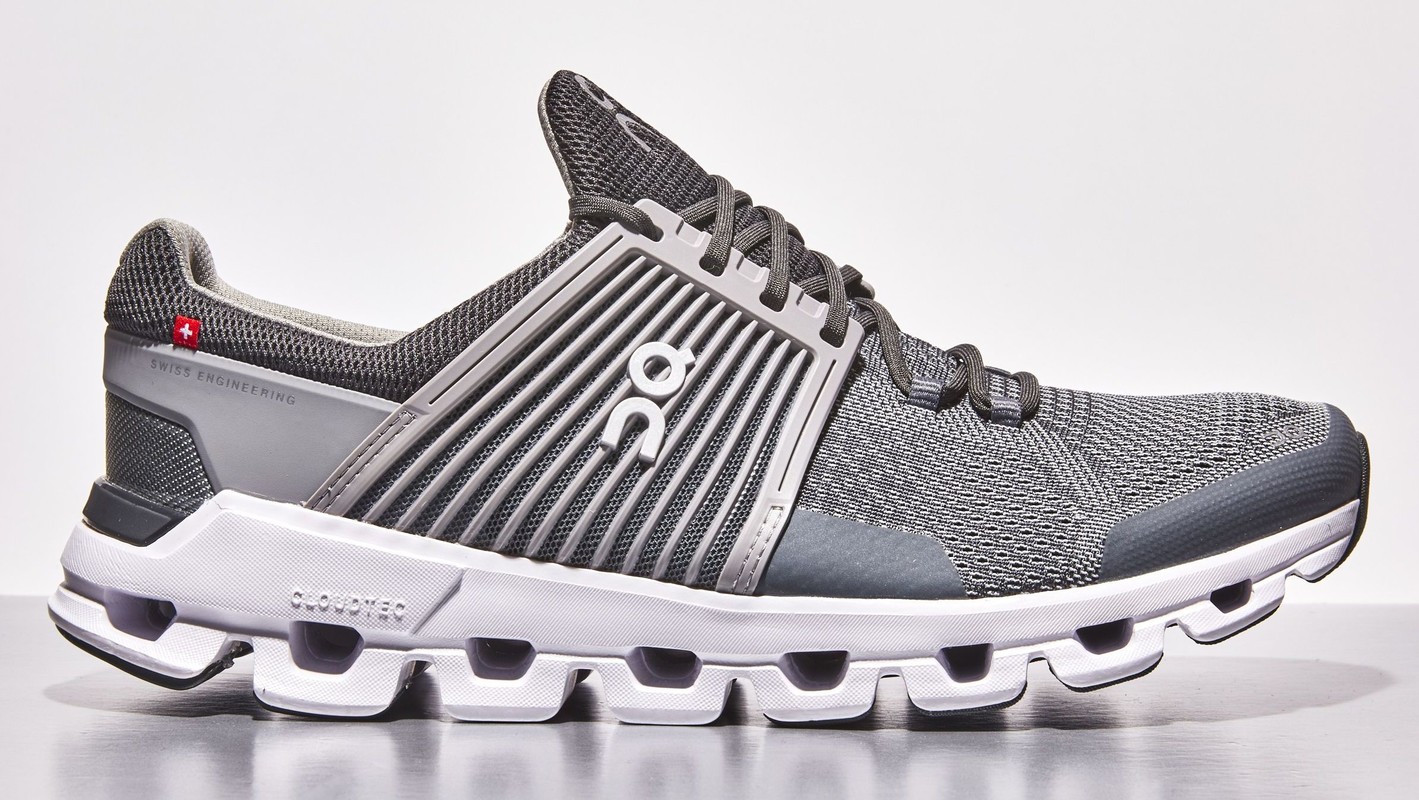 The On website looks good - it has a clean aesthetic, and focusses on story-telling and brand-building, not on selling products.  As a person who’s in business myself, I appreciate this.  Cheap knock-offs are an increasing threat, and one can't “win” a race to the bottom of the discount dollar.

A good example is the official photo of the Founders - not sure if I’ve ever seen such a good photo on a company website!  Caspar (on the left in the photo) told me the backstory: they were sitting there for a photoshoot, because they liked the blue backdrop.  Then Tegla Loroupe (legendary Kenyan marathoner) suddenly turned on the cold water as a prank - they were shocked, the camera clicked, they immediately jumped away from the water - and used the photo.

The tech and the Raclette - the marketing flair - all work together.  If one looks at the back-stories of the Top Ten movies of all time, the Top Ten songs, Top Ten buildings, Top Ten products - many people hated them when introduced.  The most resisted ideas were later idealized as the best.

Write your own story, then commit to it. 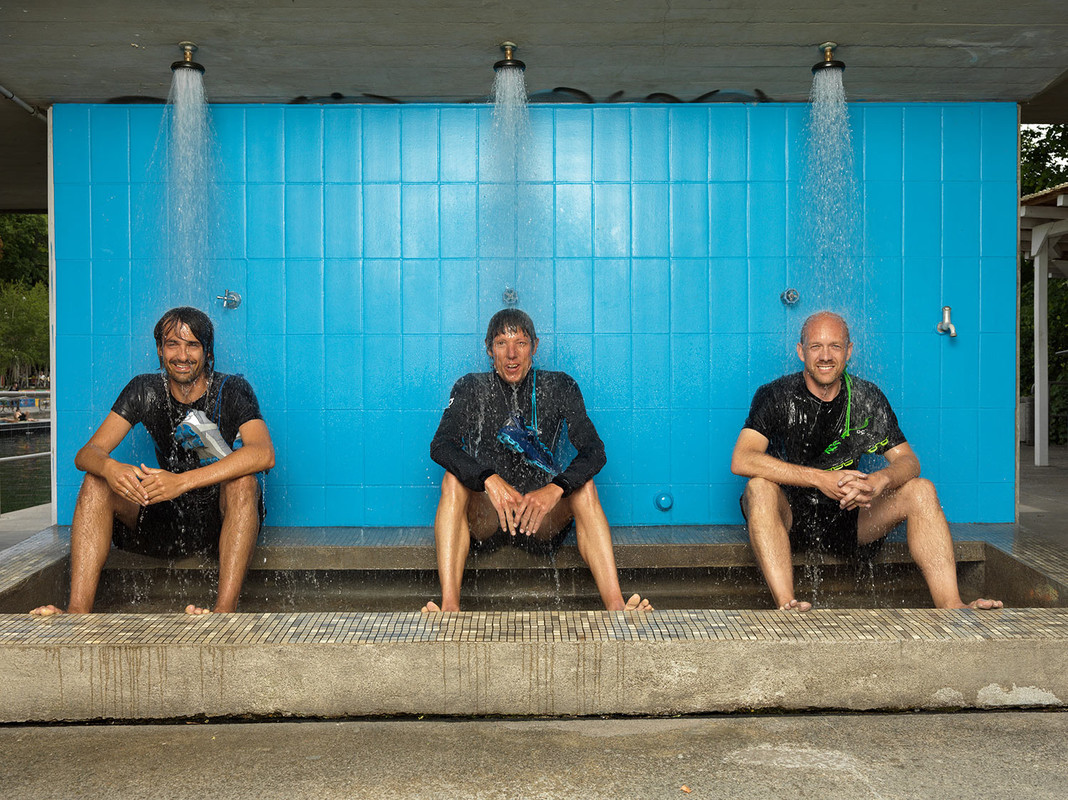