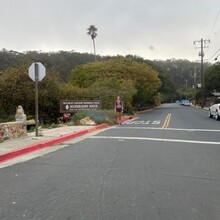 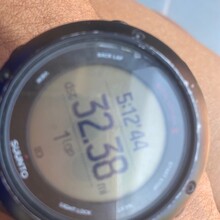 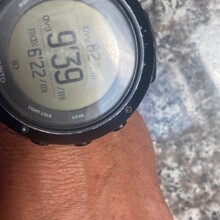 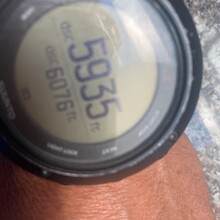 On July 24, 2020 at 7:32 am I set out for the women's FKT on the East Bay National Skyline Trail. I chose a Friday so the trails would be less crowded. I recorded the run on both my phone (Strava link attached) and on a watch (photos of watch at end attached). The watch doesn't upload (it's old), but I figured it would be useful to be able to see my pace and mileage. Additionally, my phone sometimes inflates miles, so I figured data from two devices would be best. I used the stats from the watch primarily, however you can see the elapsed time on Strava is roughly the same.

The water is still off in EB parks, so I had my mom meet me at Skyline gate with water. Additionally, a friend met me for the last 3.5 miles of the route to pace me through the final downhills, and to add some fun!

It was quite windy in the first few miles and quite cool, and I was super grateful that the cows were not out on the trail as they had been the week prior when I went to familiarize myself with this part of the route. Overall, the weather that day was in my favor and only warmed up when I got to Big Bear Staging.

The course is pretty straightforward, but right before Steam Trains the marking toward Vollmer isn't great as there isn't a trail called "Vollmer" (that I could see)- I had to stop and check I was going the right way (I was). There is another spot at Sibley, right when you come into Sibley parking lot, where the markings are a little difficult- I was really happy that I had looked at the course using the Satellite feature to know where to go. Everything was going smoothly until Huckleberry, which was pretty wet and slippery that day, and that section is always a challenge for me anyway, and I definitely lost some time there. I lost quite a bit more time through the technical French Trail, and I was feeling like I was probably not going to get the time I needed for this FKT... however, once I got up the climb on Macdonald, I was able to make up a lot of time there, and on the Grass Valley and Brandon trails. And knowing it ends with a few miles of downhill means you can really spend it all on those last little rollers!

Only big issue was I made a wrong turn right after the French Trail and went the wrong way on Orchard... it took me all the way down to Bridle, so I had to run along Bridle and then run back up the West Ridge Trail to Golden Spike. If anything, it added a little mileage. I got back on Golden Spike and then the trail markings were very easy from that point on.

This is a really amazing route, and I really love going through the different parks. I would offer to anyone thinking of taking this on to 1) make sure you are familiar with the turns, because there are a couple of confusing spots; 2) don't be discouraged if you come out of Redwood behind on your pace-- you can make up a lot of time after that!

Admin note:  This FKT is FLAGGED because Katy went off route for 0.8-1.0 mile.  Here's what she said about that:  "My error was: After the French trail, I was supposed to turn onto Orchard Trail to get to West Ridge but I turned the wrong way. So instead of hitting West Ridge I ran all the way down to Bridle trail. The reason I didn't go back to where I made the error was, at that time, I wasn't really sure what the error was.  I did know (once I hit the Bridle Trail which I am familiar with) that I could reconnect with the intersection of West Ridge and Golden Spike, where I needed to be. And I was fairly confident I was adding mileage anyway. And, to be honest, I was doing this for fun and figured if I really messed it up and it didn't count then, well, so it goes. I went back into the trail maps to make sure that the error did, indeed, add mileage rather than reduce it."  The error seems to have increased her distance by 0.1-0.2 mile.  Nevertheless, part of doing an FKT is to know and follow the correct route!

Fwiw I encouraged Katy to submit this as this mistake was relatively minor and makes the course significantly harder in that section (it’s not just the little bit of added distance, you take a runnable uphill and runnable downhill and replace them with a much slower version of each.

It also seemed a pity to not submit it when the fastest time (Lucy Andrews) made multiple mistakes that were favorable. A counter to this is that Devon also made some mistakes but did backtrack.

Part of the deal is knowing the route. It is irrelevant if your mistakes cost distance or time. The FKT is for the route. If you go off you must return to where you left the route.

Thanks for the reply. Some FKTs seem to care less about route deviations than others, though it’s true as you say an athlete should know the route.

If the standard for flagging is any deviation, even slight, most of the FKTs on this route should be flagged, I’m happy to produce the list of which and why. If the standard is no deviations except those within a very small tolerance (for instance the Bort Meadows mistake that at least half of the times here have made), then there’s still an additional 2-4 that need flagged (again happy to build the list).

My concern here is not that I feel that Katy’s time shouldn’t be flagged, it’s that if we are to flag it I feel the standard should be clear and consistent else this flag is unfair.

Also to be clear I’m not biased towards or against any of these runners, I think they are all amazing though I don’t know most of them (including Katy) outside of having seen their runs on Strava.

When I did my own FKT attempt I worked to ensure I did know the correct route, and it wasn’t easy since so many tiny variations had been accepted. So I worked it out from the original track and via discussion with other past FKT holders.

That would be super if you could tell us about the deviations from the true route made by past FKT runners. All too often people go out and fire something off without putting in the effort to learn the route. That’s fine for an individual run, but not for an FKT! You could post your analysis in this comments area, or email it to us using the Contact form. Thanks!

I've specified out all of the deviations as well as the confusion around what the true route is in a post on the main comments area, if there's a way to message all of the associated past/current FKT holders for input that would be amazing. I think there are decisions to be made that shouldn't be made by one person.