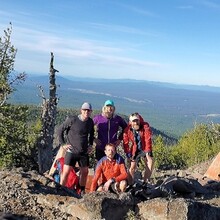 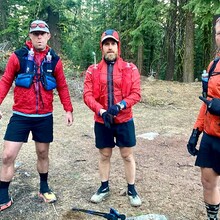 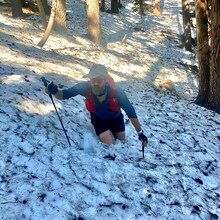 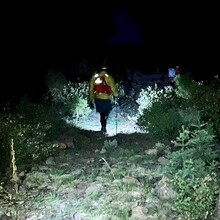 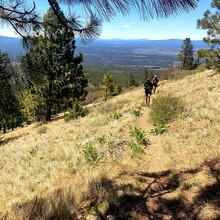 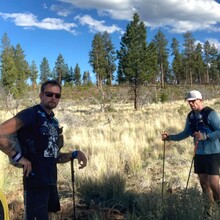 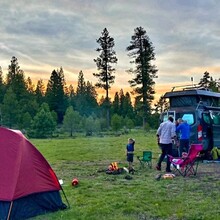 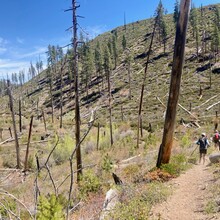 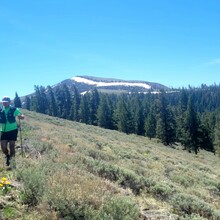 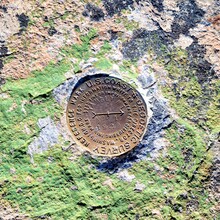 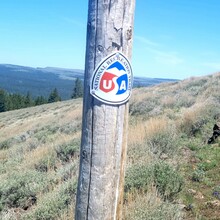 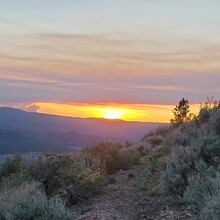 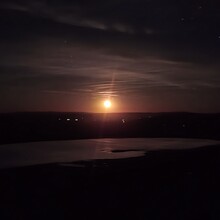 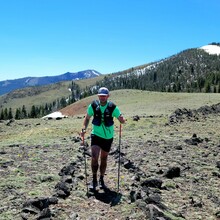 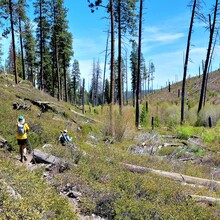 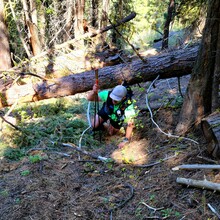 On May 31, 2021 Brandon Williams and myself (Duane Konyn) completed the supported Fastest Known Time on the 146 mile Fremont National Recreation Trail in 54 hours and 20 minutes.  There is one other FKT on this route completed by Christof Teuscher in 2018 in 57 hours and 37 minutes.  He began his FKT at the Yamsay Mountain trailhead, which is 3.5 miles below the summit, but all the literature on the trail state that it begins on the summit of Yamsay.  After contacting Christof I decided to begin our attempt on the summit.  We began as a party of four but Saulius Eidukas and Scotty Strain would eventually tap out at miles 63 and 80.  The four of us hiked from the Yamsay Mountain trailhead at 6 am in order to reach the summit with plenty of time for our 8 am start.  We enjoyed hanging out at the summit for nearly an hour, taking in the views from Shasta to Hood on a crystal clear morning.

The Fremont National Recreation Trail started without much snow but that quickly changed on the ridgelines below Yamsay as we had to struggle for a couple miles through nearly solid snow.  We worked our way down to the first drop bag, which we had placed at Silver Creek Marsh the previous evening.  Climbing Hager Mountain and the Winter Rim in the heat of the day and without enough water took a toll on all of us.  I realized I was in trouble when I suddenly got chills and struggled to make it to our next drop bag at the beginning of the Winter Rim.  I thought heat exhaustion was going to take me out of this thing only 40 miles in.  Luckily Brandon's wife, Jaime, showed up just in time to give me a place to sit down and recover out of the cold.

I slowly started feeling better in the cooling temps but the rugged Winter Rim trail was adding to Saul and Scotty’s foot troubles.  Saul’s nose wouldn’t stop bleeding and Scotty rolled his ankles multiple times.  These factors combined to take them both out of the FKT attempt but now they could become part of Jaime’s crew.  We all took a nap at Government Harvey Pass.

Scotty rallied and was able to join us for the descent to the Chewaucan River, dropping out there.  On the way, we ran into a large crew working on the Oregon Timber Trail, which joins the Fremont Trail for a while.  As we thanked them for their hard work, a lady mentioned that she had met Christof in the middle of the night during his FKT three years ago.  What a coincidence!  Brandon and I left Chewaucan Crossing in the heat of the second day, climbing through a 12 mile burn area.  We took it easy and had a siesta in the shade.

The night seemed to last forever, fatigue was setting in.  Brandon saw a bear cub (his son said it was probably a mouse) and we could hear it calling for mama the next half mile.  Finally we got to Cox Pass and immediately passed out.  I got the best hour of sleep in my life.

We traveled through the 11 mile road section of the route as the sun was coming up and were able to make good time.  On Mill Creek I missed a turn and led us nearly a mile off course.  As I started sprinting downhill trying to make up time, Brandon wisely told me to slow it down.  The crew was really on it when we arrived at the South Fork trailhead and quickly got us out of there feeling refreshed.  The Warner Mountains were stunning and there was only one large snow patch to deal with on the way.  At times the route was difficult to follow as this was a new area for both of us and our Gaia maps were not cooperating.  We trudged through the heat on rugged trails and suddenly we were there!  Our awesome crew cheered us on as we finished at Vee Lake.  What a great way to cap off an unforgettable route.