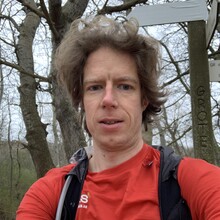 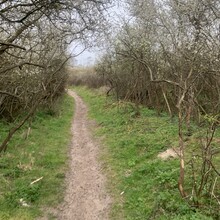 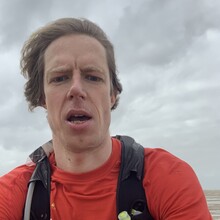 On  April 3rd at 9:30 I set out to run te GR5A Coastal route from De Panne to Wenduine. Coming from the train station I am a few seconds too late to start in time for the virtual race that is configured on the tracking website for this occasion. It's been quite some time ago since I have run in sand, but having won the North-C-trail 50k twice in the past I consider this one of my strengths. I set out at a good pace and am really enjoying the first stretches through the Westhoek dunes and over the Hoge Blekker, the highest point of the route.

In Nieuwpoort, while running along the waterfront, I able to keep a good pace on the paved surface, but am confronted with a strong headwind and start to realise that this will drain quite some energy. By the time I reach the waterfront in Ostend, the impact of the wind is quite noticeable, but it is only on the dike North of Ostend that my pace starts to drop considerably. After a stretch on the beach at 50k in, which got me working really hard, it becomes clear that the sub-5 hour target is now out of reach. The next stretch on the beach is even worse and to make matters worse I run some 100m past the turn.

I try to keep the pace up, but passing through the center of De Haan I am confused about the route marking, which seems to conflict with the route followed by previous runners. I am tempted to follow the markings for a bit, only to retrace my steps and follow the route which I have on my phone as it seems to go in quite a different direction than I expected... Back 'en route' the lasts kilometers lead through the Dune forest, which is quite a nice sight but mostly on "paved trail" as is the case for a large portion of the 2nd half of this route. Due to the route hick-ups I finish with a bit over 60k on my watch in 5:10:42. Rather disappointed to have lost that much time in the last 10k, but I'd like to blame this mostly on the wind. In any case, if I have one tip for next attempts, make sure to choose a windless day, it matters more than you might imagine ;-).

For info, I ran with a backpack with 2l bladder, warm clothes and food (as I was self-supported even from door-to-door, travelling by train), given the colder weather I was surprised though to find only a few sips of water left after arriving in Wenduine.

Mea culpa: seems I made 2 significant deviations from the marked route due to following previous runners' route rather than the markings. I only fully realized this after seeing the comments made by Joachim Van Der Poorten. In the Maria Hendrikapark in Oostend, the marked route makes an extra loop (of at least1 km extra) and in De Haan the marked route passes through la Potinière park (ca. 0,5 km extra)!