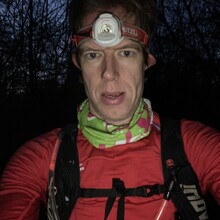 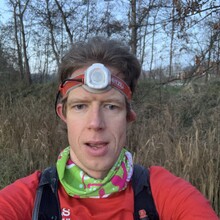 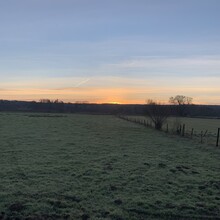 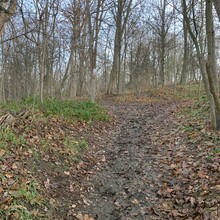 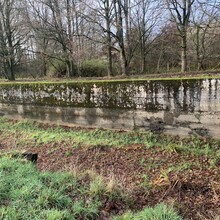 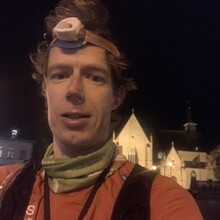 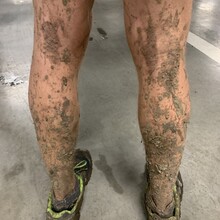 I wanted to run Streek-GR Dijleland as a final attempt of the year. Initially I thought to make it a fairly easy round given the previous time seemed easy enough and had to be bettered anyway in case I wanted to make it round within the Corona curfew (including travel). That was until 2 weeks before my attempt… Senne set a very strong time of 12:23. Although I wasn’t sure I was ready to push this hard, I wanted to give it a go. Considering Senne’s times I wanted to run at a flatter pace hoping that my pace wouldn’t decline as much.

Around 6:22 I set off from the market in Tervuren in anti-clockwise direction with a pack with about 2,6 liters of water, extra clothes and plenty of race food. Already in the first 2 km I experience two small hick-ups in the route finding. Apparently the route markings weren’t always as clear as I am used to from the other GR routes I ran, and I shouldn’t always believe my watch if it told me “wrong direction”.

Given the huge amount of rain over the last weeks I expected to find quite some mud, but to my surprise this was not the case for the first 10k. But, after that the mud sliding sections were regularly popping up along the Dijle river and its tributaries through among others the Doode Bemde nature reserve.

Entering Leuven I misread the sign and it took me a while to figure out I had to take the tunnel to cross the R23. Also in the city itself I was confused about the correct route on a few occasions. Running unsupported, I had marked two potential public water points around Leuven, the “Dijle eend” around 32 km and one in recreational domain Kessel-Lo, but I judged that my water supplies would suffice and continued without stopping.

At the top of the Kesselberg I made another small nav error, but as the sun was coming through I was in good spirits and recorded a Facebook live message announcing this attempt. Around 55k I was quite impressed to see the anti-tank trench and was enjoying running long stretches along the Dijle.

Approaching Mechelen, I passed the halfway point and was still perfectly within the planned average pace of 5:30 min/km. This time I didn’t have too much trouble to run through the city, but found the first 10k out of the city rather uninspiring. Running along the Zenne river with about 50k to go I recorded a brief Facebook live update, announcing that I had now 5h to cover the last 50k, which seemed feasible at the time.

Despite some route hick-ups in Torfbroek and hard muddy sections through Silsombos, I was still on target with 20k to go, but my margin was only a mere minutes. When disaster struck with 16k to go, running an extra 500m, this margin was entirely gone. To add to this, I had lost my spare water bottle while taking out my headlamp and some additional food from the back of my pack. Nevertheless I tried to keep the pace up. But as I was tired, I misinterpreted a route marking, and made another error at km 124. Despite the chances being close to zero that I still would break the record, I managed to keep the pace up… Until I made the next error entering Park van Tervuren, after which I was completely ready with running hard and just kept going to finish. As I released the gas my pace was easily 1,5 min/km slower which goes to show how hard I had been trying.  I stopped my watch after 12:36.

I was quite disappointed not having broken the overall record, but am still submitting this as my attempt was unsupported which brings some additional challenges. While my running was fine, I lacked the extra mental freshness to deal with route finding and material. This was definitely a hard lesson in how not to navigate using a watch, and while I was carrying a handheld GPS in the back of my pack, I wasn’t eager to run with one in my hand :-(

For anyone considering to attempt attacking the time(s) on this route, I would definitely advise to study and recce the route better, and preferably wait for dryer conditions!