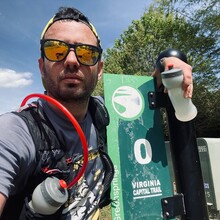 Started at shiplock park with two bottles and a little too much food / gear in my pack. Technically this was “self supported” since I stopped once at a store. Stopped at mile 7, waited in line grabbed some crackers that I never ate, & filled my bladder & two bottles for the long 20ish mi stretch to haupts store. This made my pack very very heavy but I dealt with it. In retrospect I should have put bottles out at strategic spots. Felt pretty good going into the flats outside of Richmond. Got to Charles city and passed haupts store a little later without stopping. This probably would have been a big mistake, but I was able to refill at the abandoned gas station a few miles later since their water was still on and the had a spigot (thanks). Struggled a good bit after 40, but was able to carry on to the end at Jamestown. Def carried too much water, but I had a dehydration incident a few weeks ago at the Georgia death race which I think I'm still a little traumatized from. 1 later and day my back now feels like it got hit my a train, legs are 100% okay, which is weird considering I've clocked over 150 miles this week for the Great American 5000 team race. Thought I had some blisters on my feet, but it turns out they just sore AF. It's all asphalt, and I pity the fool who tries to go back hahaha.