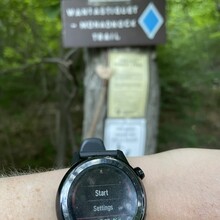 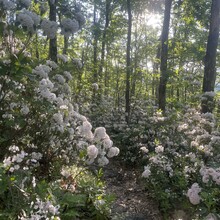 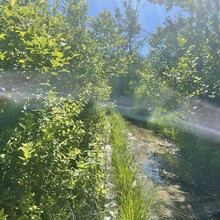 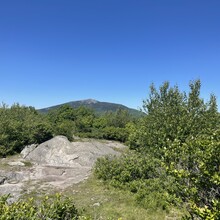 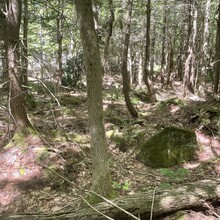 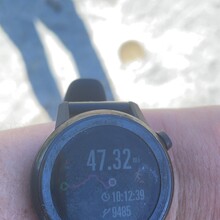 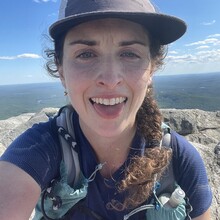 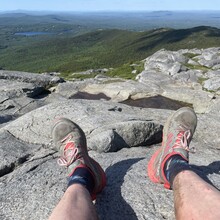 I've been wanting to do this trail since I learned about it shortly after its completion in 2018. It ends (or starts) on my hometown and favorite hill, Mount Monadnock, and celebrates an incredible collaborative effort of local conservancies, including the Monadnock Conservancy, Society for the Protection of NH Forests, and the AMC. Figured I might as well do it now! What a magical, remote corridor of hills and forest. Thank you so much to everyone who made this trail and conserving these lands for public use possible!

Was thinking I would do this unsupported, but then when I decided at the last minute to do it on Thursday, my mom offered to crew. Given the accessibility of crew access along the way, I figured why not. More fun when it's a family outing, especially since both of the dogs would be in tow to cheer :) Go with the flow for what makes sense for the route and on the day. Thank you so much mom + dogs for being an all-star crew/cheer squad! (Except for when my mom said, "are you really sure you want to keep going?" at mile 40 lol.)

While there is 3k more climbing going west to east (since the trail ends on the top of Monadnock), I figured that seemed preferable to starting the run with a quad-bashing descent off of Monadnock. Plus, running *towards* home sounded more motivating. I had never seen about 90% of these trails, starting with the very beginning, Mount Wantastiquet on the NH/VT border. WOW, the mountain laurels were popping off up there! I had no clue those flowers even grew around here. That in and of itself made it worth doing the trail in June, with the ticks, flies, mud, water, and blow-downs.

Trail was well-marked and easy to follow from Wantastiquet through Pisgah. I really enjoyed those first 15 miles or so. Classic sub-alpine NH trail followed by the dark, wooded, swirly trails of Pisgah. Next section was a physical and mental grind. Passed through a bog where there was also logging, and I missed the turn and also lost the trail a few times. Waded across a watery bog, only to realize I was off course and had to backtrack through it. Plodded around the logging area for a while searching for the trail. Finally found it again thanks to Gaia GPS. Looks like I added on about 1.5mi total in there. I also got confused when the trail crossed over a beaver damn, for real! I forgot to grab more gels when I saw my mom at mile 15, and ran out of calories and was bonking pretty hard through the interminable Horatio Colony section. Kind of a confusing maze of trails with some blow down sections, and the color of the blazes kept changing as the WMT followed one trail to the next. Finally made it out of the forest and to the next "aid station", where my mom had a coke ready for me. Life saving!

The rail trail section from Keene to Troy was a bit of a welcome reprieve after getting lost, forging water, and shwacking in the woods. Made a small out and back detour to say hi to my friend Thomas, who works at Ted's Shoe and Sport on Main Street in downtown keene. Seemed fitting to pop into the local shoe store that sold me my very first pair of sneakers when I was in middle school. As others have noted, after you get out of Keene, the rail trail is 1-3% uphill for the next 9mi to Troy. Thankfully, it is an incredibly beautiful portion of trail. Single track, shaded, and carved through big granite boulders. Saw zero people. My feet were really killing me by this point, and the consistent grade without any change in muscle groups was a physical and mental grind. About a mile from downtown Troy, the trail crossed a road and somehow I didn't see where it went! Wasted about 5 minutes and another quarter of a mile there. More coke from my mom at the Troy depot (I was thinking I would mostly eat Spring Energy Gels since they've served me well during training recently, but they just weren't giving me energy!) and then off to the last three climbs of the day. A bit more logging and shwacking before and after Gap Mountain, and then a surprisingly long and confusing approach to Monadnock before finally intercepting the White Arrow trail, which I know very well. It's a nearly vertical wall of rock from there to the summit, but I was so happy to be on familiar ground! Reached the summit 10 hours and 12 minutes after I started, in time to enjoy the absolutely glorious afternoon conditions on top of southwestern NH.

In total, it appears that I tacked on an extra two miles or so from botched route finding and the short detour to Ted's. Room for improvement :) Ended up seeing my crew at miles 7, 15, 26, 34ish, 40, and 43. Was glad I brought my water filter even though I only used it once. Despite not knowing how much running water I would encounter on the route, it brought peace of mind. (And really saved me in Horatio Colony.) The humidity is sneaky!

The walk down the mountain to the trailhead after was perhaps the hardest part! :P

Excited to get a lady's name on the board for this, and to see people go faster! While many sections of the trail feel very remote and could use some maintenance (I saw no people from mile 2-26, and then two people from mile 32 to the end), it is a really special line. Plus, these types of adventures are more fun when there are some unknowns, like how you will find the trail. And the views on Monadnock are even sweeter after running nearly 50 miles to see them.