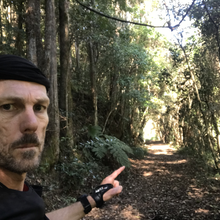 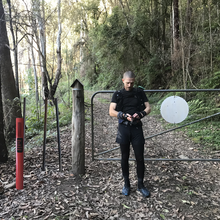 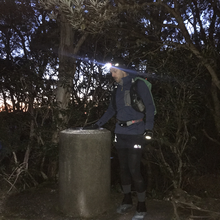 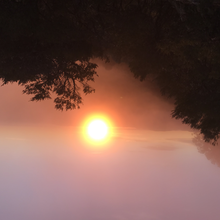 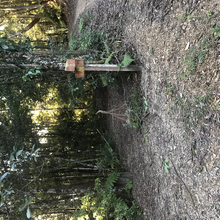 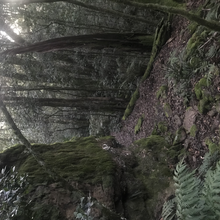 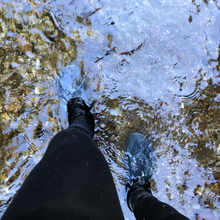 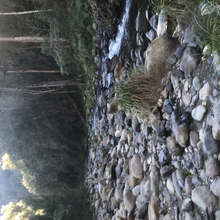 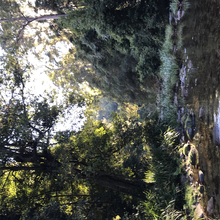 Drove to Point Lookout Friday night with a mate, Paul. Stopped in at Bello and grabbed pizza and  went to the pub for a beer while we waited for it to be done.
Making our way up to the Point Lookout Car park the temperature gauge was moving between 1 and 0.
We lit the fire in weather hut and rolled out the swags. The hut warmed up nicely and we were sheltered from the wind outside. I was prepared for a cold night but ended up shedding layers.
Woke up in the morning before first light and the air was crisp. I made a pot of coffee and did a final gear check.
I went over to cairn that marks the highest point on the Snowy Range. Started the timer and took off. I chose to go along the Point Lookout track/Lyrebird track via Banksia Point. I was feeling really good, legs were ready.
I had only made it about 600m down the trail when I tripped and went down, hard. My flask broke against my chest, water poured out. It was a write off. My left knee stung but it didn’t seem to be too bad. I was generally sore all over, but I could still move so decided to push on.
My reason for going along Lyrebird trail was to get the views before dropping down off the escarpment. I was pretty spoilt and saw a spectacular sunrise. The ground was frosty and wet areas were frozen.
Making my way down Robinsons Knob I began to notice a dull ache in the right knee. Could still run. But it was niggling. Figure it would loosen up after a time.
Turned off onto Grasstree Trail. Having run past here a few times it was exciting to go into new country. The trail is quite overgrown in places and others relatively runnable. The ground is littered with fallen twigs, I stumbled consistently. The trail trends downward but has has some uphill sections as you follow the ridge. There are some awesome glimpses of Point Lookout in aspect I have never seen. It was along here that began to notice my knee was really sore and at times painful. It seemed to hurt more on the uphill so decided to continue downwards and it would take however long it took. I could run in bursts.
Grasstree Trail drops through some swithcbacks down to Sunday creek. The was well defined and it was easy to follow the worn trail from previous traffic.
At Sunday creek you have to follow the creek. The water was mostly ankle to knee deep and icy cold. The whole time you are in the creek and the river is quite cold. The steepness of the valleys means little sun enters.
I was in the water for approximately 3km this was slow and slippery. These valleys are wild and isolated. The water is crystal clear.
You start being able to spend more time on the bank.
Eventually you reach a four wheel drive track. You follow this to the end.
The trail seemed to be different from about 20km. You start to cross the remains of old farm land , now overgrown with weeds. The trail is a slashed path through. I was ready to run here but could still only do so in bursts before knee pain got to be too much. I also began to notice it was hard to breathe due to a tightness/soreness where I broke the plastic nozzle of my water flask when I first fell.
You go along the remnants of the old Darkwood road, crossing the river a couple more times. Most of the time you are above the river looking down.
There was plenty of mandarines on trees from the old farms. There are some buildings still left. There is work being done along sections of this road repairing bridge and slashing.
There are roads that go off the main route. I had to check with my map on my phone a few times to confirm I was heading the right way. Water is not an issue once you reach the creek/river.
I finished at the closed gate on Darkwood road. I figured this would be a good place to keep a consistent time measure for future efforts.
Great adventure run that could be done much quicker than the 7hrs it took me.