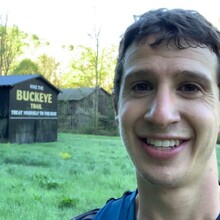 I woke up early and drove from my house in Cincinnati out to the trailhead at 3223 Waggoner Riffle Rd. There is a porta potty at the start line which was nice :). There is no water on the trail so I brought a vest and waistpack for 44 oz total of some water and some tailwind. I also brought enough gels to take every half hour. The weather was nice and cool which helped with the water situation. With only an 80ish minute drive from Cincinnati, this was pretty convenient for an adventure of this magnitude.

The trail was in solid condition the whole way, but it clearly hasn't been used by hardly anyone in the 2 years that it has been in existence. It is marked very well with blue blazes but I would highly recommend having the GPX file loaded because there were several times on the way out where I had to stop for a little to make sure I was going the right way. Whenever I was unsure, I looked around and was able to find a blue blaze pretty quick. There was one time where I kept going straight instead of turning for a switchback. Overall, I don't think I wasted more than 2-3 minutes. One of the most confusing parts was at about 2 miles in when you come to the first road crossing. You have to exit a gravel parking area and turn right for about 100 yards on a dirt road prior to turning left where the trail continues. There's another part at just before 13 miles where you come to the "Hike the Buckeye Trail" barn (see picture) and you have to run through a field for a short bit. The turnaround point at halfway has a sign at the road that says you are exiting Edge of Appalachia preserve...or entering, can't remember. There appears to be some civilization there if you needed an emergency bailout. I brought my phone with Verizon and I was getting notifications at various points along the route so at least some of it had service.

I remember learning that this section of trail was built partially by the Buckeye Trail Association and partially by some other agency. You can tell that, for example after the road crossing at mile 6, the trail switches from well made singletrack that the BTA built, to more of the bulldozer type trail you see a lot at Shawnee. I worry that with the little foot traffic on that section, it will soon become so overgrown that it isn't enjoyable to run anymore, but for now it is still good. There is a 1.5-2 mi section of smooth dirt road each way and it makes for a fun fast bit. Because of the lack of traffic, there are lots of sticks/branches in the trail, but only a few downed trees.

I didn't see a single human being during the entire journey, and I wasn't all that surprised about it either. I did almost step on a huge snake when I was looking down to eat a gel towards the end. The trail was absolutely gorgeous the entire way. It looks at times like a little version of the Smoky Mountains, especially in the morning when the valleys were covered in fog. Running wise, I felt great and had a consistently good day throughout. It is nice that the route is primarily uphill on the first half. There are a couple of long climbs, but everything is pretty runnable grades in my opinion. A few of them are around 400 feet which is pretty awesome for Ohio. I hope more people give this route a try, it is such a gem. Feel free to reach out with questions - I would love to help anyone trying to do this!