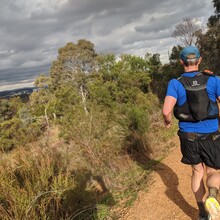 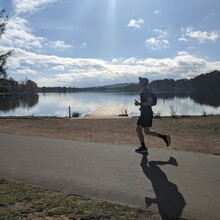 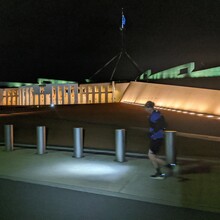 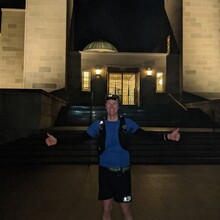 This was my go at the Centenary Trail.  I have cycled and run many parts of the course but never as a continuous route.  I started and finished at the Australian War Memorial and I completed the course in an anti-clockwise direction.  I had perfect weather for the run.  I was joined at various points along the route by Alexander Austin, Steve Hanley, Mark McDonald, David Baldwin and Julie Quinn.  This course has a number of flat sections of bike path - having someone to run with certainly helped alleviate the monotony - many thanks to all who joined me!

My route varied slightly to the original and subsequent routes taken by previous FKT holders. The variation was to include all optional peaks as outlined on the pdf maps provided by the ACT Government https://www.environment.act.gov.au/parks-conservation/parks-and-reserves/find-a-park/rural/canberra-centenary-trail.   Peaks summited were, in order, Mount Ainslie, Mount Majura, One Tree Hill, Black Mountain, Isaac Ridge, and Red Hill. This added circa 3km to the route.

It should also be noted that there were some construction works near Coombs which prevented access to the normal trail route.  This resulted in a slight deviation for 1km but distance wise should have been negligible (there is a secondary residential road that follows the same trail approximately 100m from the regular trail).

I ran the course unsupported (ie I carried all gear and food without resupply) I did stop at a couple of shops along the way to buy a coke.