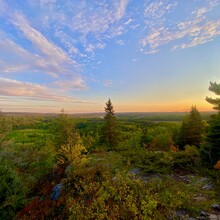 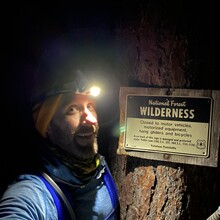 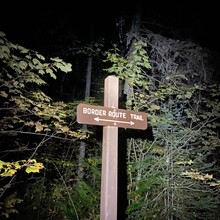 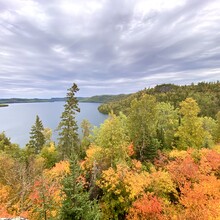 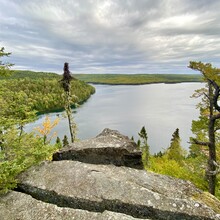 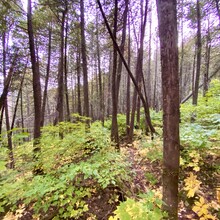 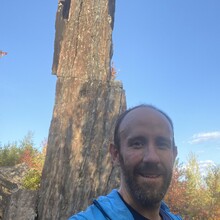 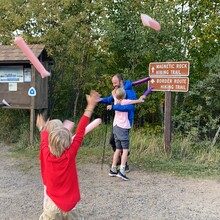 I started out on this run at 6:30 pm and in middle September going East to West. I specifically wanted to avoid my last year's mistake of too hot in the middle of summer - heat exhaustion on top of a broken toe got the better of me and I DNFd with about 9 miles to go. I also chose to run overnight first this time around as a way to force myself to slowdown and save my legs for the palisades - particularly the Rose Lake climb at mile 40. I do think it paid off (honestly, I was more trained and prepared this year than last year too - many factors and every run is different) and I had a successful run with relatively few hiccups along the way.

As I said, I started at the eastern terminus at Otter Lake/Swamp River trail head. I had about an hour and 15 minutes of daylight, I got up to the 270 lookout right at sunset - perfectly timed for a gorgeous look out over the Superior National Forest. Spent a few minutes enjoying the view and reflecting on feeling so small amidst the boreal forest and then headed west along the trail.

Nighttime running it the wilderness is a trip! It was a new moon and cloudy so the sky was black. No light at all except my headlamp and a waist light to guide the way. I hadn't used a waist light before, but I definitely recommend it. 2 angles of light cuts down the shadows and it helped to have a lower angle to help light up below the MANY branches, bush, brush, boulders along the trail. I crashed by someone's makeshift tent pad around midnight and laughed to myself for a few miles when I heard someone in the tent shout "WHAT THE F*CK WAS THAT?!" That gave me some good chuckles to myself for a few miles! Maybe I'll be an urban legend of a Bigfoot near miss in the wilderness.

At one point on a food break, I turned off my lamp and soaked in the absolute dark - I literally could not my own nose. The air was perfectly still, not a breeze in the trees even. A pair of loons started calling and the echos off the palisade walls amidst the perfectly still air were so loud I first mistook them for a pack of wolves. It was hard for me to turn my light back on and break my own silence while listening to our state bird singing to me, but nobody else was going to run it for me! onward.

The status of the trail at the end of 2020 here is that it is in decent shape. The BRTA has done heroic work clearing this trail up over the last decade. Exceptions are both the eastern and western 5-10 miles that bookend the  trail. They are clogged with thick brush and the trekking poles act more like icebarge breakers in the Duluth harbor cutting through the ice than they did as poles. The other main issue is given COVID and no trail clearing crews were out this year is that the trail is littered with fallen trees. I started the first 15 miles trying to drop waypoints on my GPS every time a tree was down, but it became a full-time job and nuisance to continuously taking my phone out to drop a new flag. I'll still deliver what I have to the BRTA but then more of a generalized - "everywhere there are trees down and the east and west and clogged with brush." But the few bridges built over faster/wider streams are in great shape, the trail is mostly identifiable - both by a few blue reflector blazes, otherwise blue tape at portage crossings and a few signs indicating where to go. Def bring a map and GPS unit along though. It is very easy to miss the trail and turn on a portage route, path to a campsite, or vista overlook you didn't mean to. I'd recommend all the vista overlooks anyway, but you should know where the main trial is regardless!

The exact trail is what you'd expect though - rocky, rooty, rugged beyond belief. It's a hard path and that's no joke. You're either climbing up, shuffling down, or stumbling on the roots or boulders a vast majority of the time. There's only about 4 or so miles in the interior that are "runnable - the border section between Rove and Rose lakes. Western side along the west rim segment are pretty good to and around magnetic rock is cleared and was my fastest mileage at the end but think adrenaline of finishing was pushing me to the end as well.

Temps and weather on this run were pretty steady - 45 as a high the next day, overnight lows of 37. But it was that hard zone where you cool off fast when taking a break but then warm up quickly when running again. I was glad I brought an extra Patagonia torrent shell to throw on when refueling or re-filling the water to keep from cooling off to much. It also drizzled on me for about 3 hours in the morning. I had a foil emergency blanket I wrapped around to keep the water off and still keep moving.

At daylight, the most spectacular views off the palisades presented themselves along with the forest in early fall - just starting to turn colors. The view over Rose, South, North, and Gunflint lakes and across into Canada are priceless. I missed seeing Mountain and Watap as staring off those cliffs in the dark was more like watching my headlamp disappear into the abyss.

The climb up the Rose lake palisades at mile 40 is the most difficult part of this. I'm from the twin cities metro area in Minnesota and definitely a "flat lander." The hills I can train on are nothing, and in particular after some very tired legs and at this point I had been going for 14 hours. But getting over that, taking a rest at the Rose falls for food and hydration is a well earned break and highly recommended.

The route then goes up and down quite a few more times until the path runs along Loon Lake and you're exiting the Wilderness border. It's relatively flat at that point (though clogged with thick bush) and easier on the legs to get through. My mileage pace picked back up again and I was able to make up some time lost on the palisades of the interior. The final 10 miles after the first post-wilderness road crossing, Loon Lake Rd, are fairly well maintained and I expect get a lot more residential use. They're also criss crossed by snowmobile, ski, and horse trails and can be a bit difficult to keep on track. I'd definitely recommend this part by daylight if possible. There's blue tape/flags marking the way but can be hard to find. Also most the signs in this area assume you're headed east and aren't facing you as you travel west (as I did) so I potentially missed some help from signage.

Last detail - no need to carry extra water. Start on either side with full hydration bladder or water bottles and fill up along the way. Plenty of strong running streams/rivers or big lakes to fill up at. I'd say you have a decent option averaging every 8-10 miles. more than enough on a standard 2L bladder.

I want to give a huge shoutout and acknowledgement to Faye Norby and Jeff Leuwerke who established the first unsupported FKTs on this trail. But also posted a well documented run reports that informed my attempts. Their descriptions have had me chasing the dream of this trail for 2 years now and it is a thrill to be counted amongst them as unsupported finishers!!