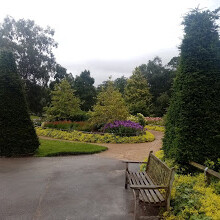 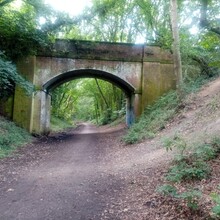 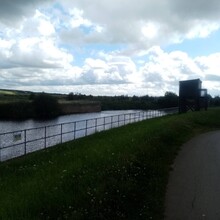 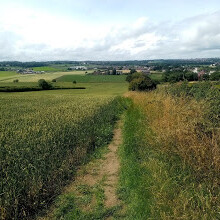 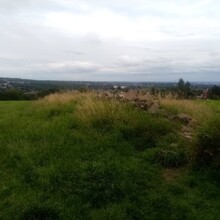 This route had some unexpected encounters...at about mile 8 of this attempt I went over one side of a stile and a small deer was going the opposite way at the same time, it bounced off my arm and stomach, and I am not sure which of us was more surprised! The encounter highlights just how rural this route actually is, despite being so close to the city centre of Leeds.

I had done several recces of the route over the last month or so, gradually going out and back from the centre of Leeds to do sections at a time. I was struck by how green it was and also by how variable the route was, heading across fields, past the river, and up and down many stretches of farmland and the edges of forests.

For this attempt I ran alone and took 2ltr water with me in a pack, and a water filter, and a lot of flapjacks, sweets and some salt and vinegar crisps, although in the end I relied more upon cafes and service stations to stock up when the route passed through villages and the outer edges of Leeds. The weather was nearly perfect for a long day out, whilst it was overcast and drizzly, and at one point there were some short sharp downpours, it didn't get overly hot at any point. I started off from Golden Acre Park just before 7 am and went clockwise, heading first towards Harewood House, past the Emmerdale farm set on the way. From there was a long stretch along field boundaries and across roads through several small villages to Barwick in Elmet, with its distinctive maypole and also a local shop. Passing through more fields and along woods brought me to Garforth, and then down along the linesway, an old disused railway, down towards the river and around to the edges of a bird reserve. Heading south through more farmland and past some historic villages, each with their own ancient looking churches and in some cases cricket matches happening on their greens. Past farms, including through the famous 'rhubarb triangle' area of Leeds, and down towards Wakefield the route undulated up and down fields, woodlands and over styles, taking in views across rolling hills in all directions and heading through fields of sheep and horses, and at one point a family walking five alpacas.

Batley included ruins high on the hills and a route around a disused quarry and a closed train tunnel, adding a lot of variety before a long stretch along wooded areas alongside rivers. Eventually the route turned towards the Leeds Liverpool canal and finished with a section of uphills, including up Hanger Hill near Horsforth, which coming after mile 55 felt unwarranted, if scenic at the top. From there the route went back towards Golden Acre Park to end back where I began.

This route as you've detailed in the description is very old and therefore has had many attempts outside of the standard relay race which is run along it, organised by Kippax Harriers. A quick search on their own site shows a current "Hall of Fame" with the solo FKT's for the route.

12:00:00 is currently the FKT set by Mark Springer and Steve Wood in 2004, I'm new to this website but the current FKT needs reflecting on this page somehow. As the page creator would this be your responsibility?

Regardless, great effort, as far as I could tell (I've been eyeing up this route for a few months now) you've set the female FKT previously held by Jay Kitchen!

Great to read your post Alice. I live close the route in Woodlesford and had been building up to doing the round earlier this year, until lockdown and then illness intervened. So, really great to see someone having given it a go.

In particular, I'm very much with you for having used the current route of the LCW. I've seen the list of times on the Kippax Harriers site, but they are all for the old (ie pre 2006) route. I actually ran both the old and current routes, to compare them, and found the old route pretty unsatisfactory - it's more like a Wakefield Suburban Way out there, just a few old faded LCW signs and not marked on the current OS map. Am minded to think it's time to update things, not least as there is a separate Wakefield Way now too. As such, I feel it's fair that you should claim a new FKT!

Like you, I used shops en route - East Ardsley, Thornbury, Barwick and, particularly, Garforth being good bets. One of the advantages of doing an "urban ultra" is that logistics can be so much easier than for a more remote one. If you pick a good day, know the route in advance and use the shops you could probably get away with carrying very little kit at all.

Sounds like you had a nice day of it in July. Parts of it pretty overgrown just now, and back in Jan it was a complete mudbath, so I reckon late spring/early autumn are good times for a fast round.

Well done on the FKT!

I’ve been running on and around sections of the route near Pudsey / Calverley for a few years now and never known about the LCW. Following a run out towards Horsforth after spotting the named path on a map I’m keen to recce the route maybe with a view of piecing it together sometime next year.

I enjoyed your report and glad you got the LCW on the FKT “map”.