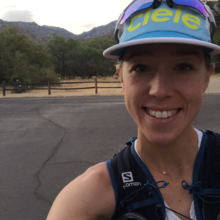 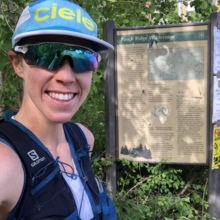 I have been wanting to run up Mount Lemmon since we moved to Tucson in January but never found the time. We are planning to move back to CO in a week so this opportunity was my last chance to go for it before we left! I started just after 5 am and it was already in the 80's and humid before sunrise - there was also and Excessive Heat Advisory issued for the Tucson area. It was going to be a hot one!!

I started off feeling strong and made it past the popular Romero Pools off of the Romero Canyon Trail. About a mile after this point the trail starts to get really steep and a bit overgrown. There were a bunch of trees that had fallen across the trail and all kinds of prickly bushes and cacti encroaching on the trail! I made it through and up to the Romero Saddle which had expansive and amazing views! From there I hopped onto the AZT for one of the steepest sections of the route before connecting to the Mount Lemmon Trail. The ascent up into the pine trees was a much welcomed respite from the direct sunlight, though the temperatures were already quite warm above 9000'. There was not much to see at the "top" but the journey up was gorgeous!

I descended down and the temperatures quickly hit 100+...it was a slog to complete the round trip! A cooler day (aka not at the end of May) would be a great time to do this route again :)