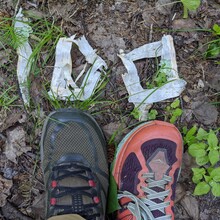 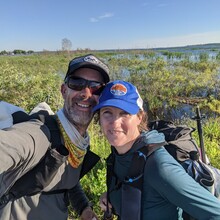 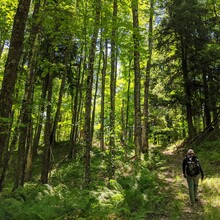 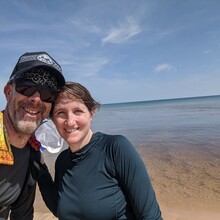 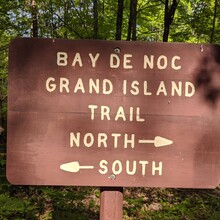 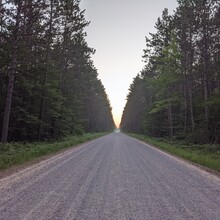 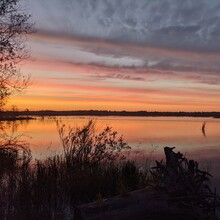 Allison and I had been eyeing this route for months, though more as a lake-to-lake than a lake-to-lake-to-lake. When bad weather scuttled plans for another multi-day endeavor, though, we saw the chance to do this as a more epic venture. From Lake Michigan to Lake Superior on the old Chippewa portage route, and then back! No better way to blow some vacation time.

Day one was mostly just exuberance at finally being on the trail after the planning and replanning. The Bay de Noc trail turned out to be as advertised: mostly an easy walking trail, with plenty of natural water sources (get used to tannin tinted water), and enough topography to keep the feet happy. Daylight is endless at this time of the year, especially that far north, so by the time we looked for a spot to camp, dusk was just falling. We' covered a little more than 40 miles. Overnight we heard our first wolves howling in the wild.

Day two was tough. The mosquitos bothered us on the first day, but on the second they called in reinforcements. It was also much less cool in the morning. And, as we finished up the Bay de Noc trail, traveling the next stretch on the North Country Trail, the topography became much more rugged. This led to a few hours of climbing short, sharp, hills in the broiling stuffy forest, following a path that became increasingly indistinct, all while wearing a headnet and long clothes. Zero fun, but this was also easily the most beautiful forests of the whole route. The enormous old growth hemlocks alone are worth going for.

We emerged from the woods with about 4 miles of road walking to Lake Superior. We intended to just dip our toes, but the water felt so good that we jumped in (educating the rest of the beachgoers in the ways of hiker trash). Then, we headed back south into the forest. The temperature had climbed into the 90s, and the mosquitos were gone. We passed our campsite from the night before and continued on a few more miles. We camped in a pine grove which was miraculously mosquito free. The deep pine duff was like sleeping on a down mattress. Almost. We'd come 33 miles, slacking a little due to the slow morning and playing in the lake.

The final day we covered the last 36 miles back to Lake Michigan. After the morning onslaught of mosquitos, it again was warm and sunny enough to keep them away. We decided mosquitos make for excellent FKT incentive, as we wanted to be well off the trail before the evening wave began. We accomplished that, making it back to Lake Michigan before they arrived. We started at 0539 on Monday and finished at 1932 on Wednesday, 2 days 13hrs and 53 minutes later. In the nearly 90 miles of trail we covered, we did not see a single person.

It's hard to convey how surprised we were to find out a couple days later than Andy Averill had run the route the day before we started. These woods are REALLY remote, and the Bay de Noc trail isn't often traveled. So cool. He opted for roads over the North Country Trail and connector between Lake Superior and the Bay de Noc, an option which we considered as well.

All and all, a fine northwoods adventure. Our time is super soft, so someone get out there and crush it as an overnighter, but do it in the 2 weeks before the leaves fall in September.

Here's our Lake to Lake to Lake video (part 1 of 2). It's about 7 minutes long and shows our adventure from Little Bay de Noc on Lake Michigan to Au Train on Lake Superior. We'll probably have part 2 ready next week.

I love your trip reports and all your adventures! Thank you! Here is the video for part 2. https://www.youtube.com/watch?v=YwTyilr-mEg