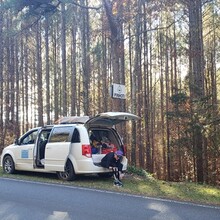 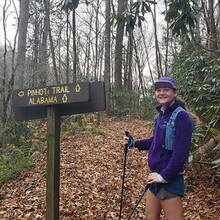 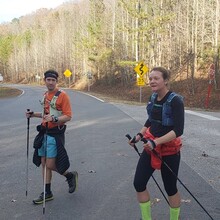 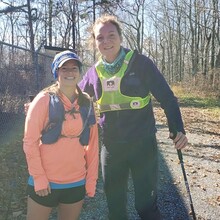 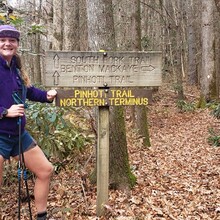 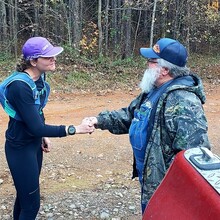 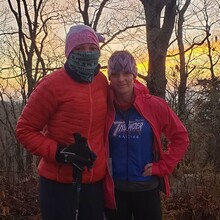 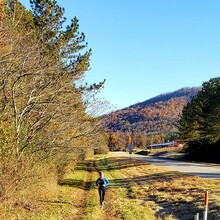 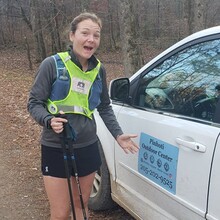 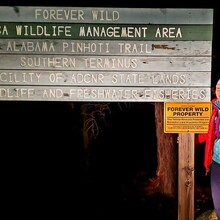 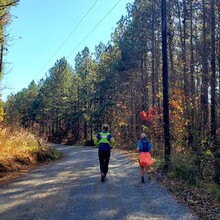 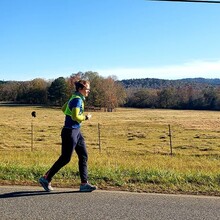 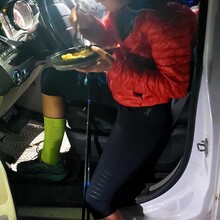 350ish miles, 50,000ft of climbing, crew, pacers, friends and the best memories and pain I've ever faced. The Pinhoti FKT attempt was about much more than my individual pursuit, it was about opening the door for women to take the stage and shine.

“Is this truly your limit? Can you really not take one step further?” I asked these questions in my head as I fumbled along the Pinhoti trail in the middle of another long, dark night. “No” the response came almost immediately, “this isn’t the end”. When taking on a journey of 350 miles and 50,000ft of elevation, there is almost no question there will be moments of doubt and uncertainty. Having never taken on 350 miles in one push before, I had no idea what mile 180 would feel like, let alone mile 280 or 315. How could I possibly make it through over 5 days of minimal sleep and big miles let alone try to have fun and stay coherent the entire time? The answer was and is, one step at a time.

This is not the first time I have attempted to run over 200 miles in one go. Subsequent DNF’s at 200 mile races and a previous attempt on the Pinhoti, had taught me to respect the miles and recognize the enormity of the task I had set myself. The Pinhoti trail is a 350 mile, 50,000ft accumulative elevation trail that runs from the northern Appalachian mountain range of Georgia, to the southernmost point of the Appalachians on Flagg Mountain, Alabama. While there is a self-supported women’s record coming in just over 10 days, there was no supported women’s record for the trail despite several attempts by strong runners. The men’s record was set in April by Coree Woltering, an incredible runner and legend at long distance FKTs. My goal was to put forth the best women’s supported time I could and get as close to striking distance of the men’s record as possible. I wanted to set a women’s record that would challenge the next women and show the ever closing gap between men’s and women’s times in ultra running.

The planning behind any FKT and particularly a multi-day one takes a significant amount of planning time. Leading up to my start date of November 21, I met with my main support crew multiple times on zoom and talked almost everyday about the details for supporting the run. I am lucky enough to have great friends in the area and had one dedicated crew member for the entire journey and several pacers and extra help in the last 120 miles. My friends at the Pinhoti Outdoor Center donated the use of their minivan and set up a mattress in the back for me to sleep when I wasn’t running. The convenience of being able to hop in the back and sleep anytime I needed to, paid off tremendously during the run. We had a full plan of where the van could meet me and the mileage in between, as well as approximate ideas of pace and when I would want to sleep. While this ended up changing pretty quickly, it helped to have some semblance of an idea and plan heading into the attempt. I also work hard to make it easy for my crew by labeling all of my gear and placing it in clear bags for easy access. The Nathan clothing bags were put to great use to separate shorts, long sleeves, tights etc. I also relied heavily on the safety gear for road running and traveling through hunting areas. The planning meetings helped my crew and myself to get to know each other better and make sure we were as prepared for different scenarios as possible.

Arriving in Birmingham, Alabama, I felt ready and calm for the FKT to start. Even though I knew it would test every bit of endurance I had built, there is almost no point of getting nervous for such a long endeavour. I’ve found nerves cause me to rush and make silly mistakes early. The other wonderful part of an FKT starting in a rural area with no service, is the lack of fanfare and hype surrounding the start. We drove to the Northern Terminus which is a little over a half mile walk in from the dirt road pull off, promptly went the wrong direction to get to the start, and then managed to find the sign. I hit the start button on my watch at approximately 9:28am and began my journey.

I find the beginnings of any endurance event the most challenging mentally. Even though I have run ultra distances and marathons many times, it is still overwhelming to know how much is left. Whether that is 30 miles or 350, it is so easy to become completely overwhelmed by the enormity of the task and be defeated before the event has begun. In the beginning of my career, I would often start crying or become upset in the first 10-15 miles because I could not wrap my head around how much mileage I had left and I would panic if I did not feel good right away. Luckily in working with my coach Shawn Bearden, we’ve spent a significant amount of time on the mental side of ultra running. He has taught me that the ups and downs we all experience are not something we can predict or always control. They can happen much sooner than we expect and getting attached to either the highs or lows can lead to less than desirable outcomes. Trotting along the trails in northern Georgia, I tried to keep my eager fresh legs from overdoing it. The beginning of the trail winds through the northern Georgia Appalachian mountains and hits the highest point of the trail within the first 20 miles. Coming from California, I was ready for the hills and enjoyed the varied terrain and well kept trails. The fall foliage, while not quite at full peak, was breathtaking and dancing through the leaves reminded me of my childhood running through leaf piles. I