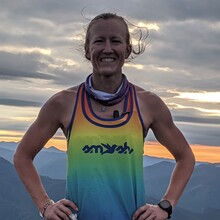 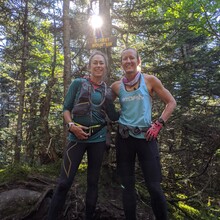 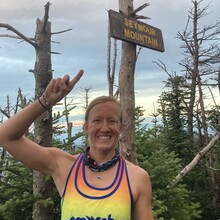 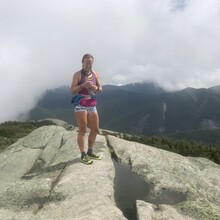 Continuing with the timing of trailhead to trailhead, I started at 4am from the Seward Trailhead on Corey’s Road on August 17th, and finished at the Giant Trailhead on 73 at 8:16pm on August 20th.

On Monday the 17th, I completed the Seward range (Seymour, Seward, Donaldson, Emmons) with my pacer Cortney. It was a picture perfect morning until the last hour when heavy rains rolled in and the trails became a river.

We drove over to the Loj where I hopped out and headed up towards Wright. I met my next pacer, Jim, at the intersection for Wright/Algonquin. We hit both of those, and continued on to Iroquois. From there, we bushwhacked down and then up the herd path to Marshall. Down to the lake, and we continued on towards Allen where I swapped pacers for Matt. We returned to the Allen Trailhead on Upper Works Road, and drove the ~mile to the Santa’s trailhead.

I got a few hours of sleep at then Cortney was back on pacing duty for the Santa’s. These trails are usually rugged but were particularly wet this morning, and the cold and wet was wearing on me so I was happy to get these done. The weather began to turn nice and it was a beautiful day by the time I was dropped off at Elk Lake with John pacing. John took me up Maccomb, and then I hit the remainder of the dix range before dropping down to meet Jim at the base of the Dix Slide. Jim took me through the Dix to Dial bushwhack - doing this under an hour got me pumped and the energy carried me through the rest of the peaks (even the long out and back with Blake/Colvin) before hitting the campsite at Gil Brooke.

Another few hours of sleep and then time for the big push with Matt as my pacer (and Aaron joining at Cliff) which would include the Great Range, Sawteeth, Skylight, Gray Cliff, Redfield, Colden, Tabletop, and Phelps! It was slow, and after two days of being ahead of my predicted schedule we were a few hours behind. I grabbed some sleep at the Klondike Lean-To but it was a freezing night so only stayed 2 hours. Jim, Aaron and I headed to Big Slide and then did the bushwhack over to Porter, and Cascade. Now just time for the “easy” ones - Street and Nye, Whiteface and Esther, Rocky Peak Ridge and Giant. I was able to catch short naps during the drives in between which was key!

It was a beautiful night and the views from Giant were the perfect way to end this journey. Got back down to the trailhead at 8:16pm.

Admin note:  Alyssa ran in a unique head-to-head "race" with Sarah Keyes.  Both started on 8/17/2020, though at different times and different locations, following different routes as they each deemed most efficient. Both women were tracked real-time with InReach trackers.  Sarah also finished the 46 peaks with an excellent time of ~4d13h39m!

Editor Note: This FKT was described by Alyssa and Sarah in Podcast Episode 105.

Additional note:  The GPX file is from Alyssa's InReach tracker.  She reported:  "The battery did die twice - once, late evening Aug 18th, but I think it died within minutes of me getting to the campsite at Gil Brooke where I was sleeping for a few hours. The second was late on the 19th, coming off of Tabletop and before climbing Phelps -- I don't think it was too long before I noticed though and we got it hooked up to a charger for the last couple miles that night."