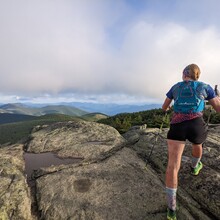 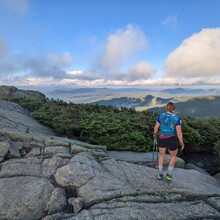 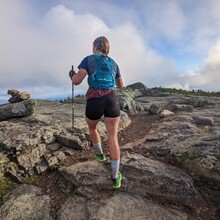 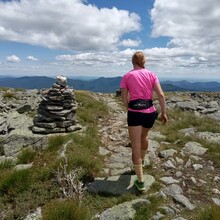 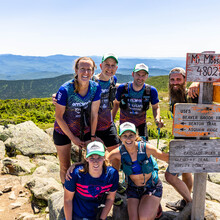 A more extensive story will be on my website (Alyssagodesky.com) soon!

Day 1- We started off with very wet conditions but it wasn't actively raining, just wet and windy up high -- about 40-50mph gusts on Franconia. Started with John and Chris to hit Cannon, North Kinsman and South Kinsman. Headed down to the Basin where I picked up Matt and we went up the Flume Slide. Just before Liberty we reunited with Jim who had started up ahead of us. Stopped just before treeline on Franconia to put on cold weather gear, hit Lincoln and Lafayette. Having scouted the bushwhack off the Lincoln slide just last month, that went really smoothly. We encountered Dreamer in the slide who was out for an unsupported Direttisma! FIltered water before heading up Owl's Head, then the bushwhack off the northwest ridge of Owl's head also went well (also scouted a few weeks ago). At thirteen Falls Jim headed straight up to Galehead hut and Matt and I went towards Garfield, then over to the Galehead Hut.

At the hut I did the quick out and back for Galehead with Lizzie and Zach while I ate some ramen! Then change of shoes, and set off with Megan and Andy for the second half of the day: North and South Twin, West Bond, Bond, Bondcliff, Zealand and Hale. It was a long day but we were moving really well through it all. Megan stopped at the Guyot campsite to filter some water for the remainder of the night, so she did not do the Bonds.

Day 2 - 4:30am start with Aaron and Aly from Crawford Notch Station up to Tom. It was chilly to start but really humid and got warm fast. Hit Field and Willey, and the descent off Willey was much better than I remembered! Down Ethan Pond Trail to the van for a quick shuttle to the Webster-Jackson trail. Matt headed into the Presi's with me: Jackson, Pierce, Eisenhower, Monroe. On the way to Lake of the Clouds hut I ran into Sue Johnston - Legend!!! At the hut, pacers switched out and I went with Zach to catch up to Liz on the Isolation out and back. Headed back to Mt Washington via the lawn cutoff and up Tuckerman's.

Here we swapped pacers again - second half was Matt, Jim and Dave Lamb. We moved solidly and efficiently through the technical stuff on that back half of Jefferson, Adams and Madison and descended down to Appalachia.

Andy and Megan took over crew duties and we headed to Cabot. The commonly used Cabot trailhead is gated ~2 miles ahead of the trailhead at the Fish Hatchery from 4pm-8am. It's my understanding they are willing to leave it open when asked, though I would like to make it a rule that going forward you have to respect the private land rules with gates, etc and not have exceptions made. Since I was reaching Cabot in the evening, I approached from the Northern unknown Pond Trailhead. Did this with Megan and Andy and it was tough but we still moved along okay. I took a little sleep and we headed over to the Starr King Trailhead, where Aaron and Aly took me through Wambuek to kick off Day 3.

Day 3 - By 6am I was heading up the ski area at Wildcat with Matt. We hit Wildcat D and A in good time, then my legs got a little wobbly through Carter Dome South and Middle Carter. Danny and Devan hiked in our resupply and met us at the IMP trail intersection which was huge! Spirits were boosting a bit as I hit Moriah, and down to Bangor Road trailhead.

A nice little rest happened while we went to Carrigain, and Jim and I headed up trail. Carrigain had a good amount of people there which was nice to see some others out. I was feeling really good with Taylor Swift in my headphones and managed to make it through that section much faster than I anticipated. Spirits continued to rise as I headed to my last big section - Tripyramids, Whiteface and Passaconaway. Aaron and John helped me move strong through that, and a resupply hike in from Liz and Barb was crucial. I had forgotten how tricky the back half of that is and it was really wearing on us as we were approaching midnight. But we made it through, and I took another little nap before my last push.

Day 4 - Went into the Hancocks with Megan and Andy. We were all focused on just getting it done as my last segment in the dark! Then over to the Osceolas which were surprisingly crowded for 5am! Tecumseh felt good - went up the trail and down the ski slope which I know quite well from training there a lot! And finally over to Moosilauke. On the road up to the trailhead a car ran off the road and caused a traffic jam so my run for Moose is actually 1/2 mile longer than needed to be! At the summit we connected with Andrew Drummond who joined us for the run down and was a much needed jolt of energy! I stopped at the East end of the Bridge in 3 days, 8 hours, 56 minutes and 30 seconds.

This was such a fun adventure with friends and family and I hope anyone who wants to do a supported effort on these mountains makes it happen - it is well worth the work!!!!!

Absolutely incredible. What a team and what an effort. So cool Alyssa!