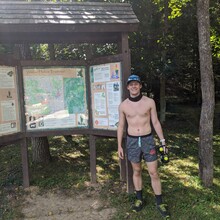 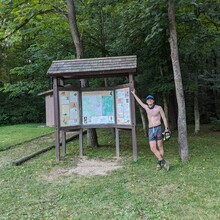 I began my attempt of the unsupported, Wildcat Hollow Trail FKT at 4:17 p.m. EST on August 11th. This is my first FKT and was filled with many ups and downs which turned out to be great learning experiences. I was running a little behind when I arrived at the trailhead so I made some tiny mistakes. I tied my shoes too tight when I started which resulted in both my feet falling asleep so I had to stop and retie my shoes two times in the first hour, but was able to fix the problem. Nothing substantial happened throughout the second hour. I was feeling fairly good and was cruising well. I just started to gradually slow down which was expected. The third hour was composed of a lot of thinking about exactly how long the trail was and if I would be able to finish before the current record. I began to run low on water (I was carrying two, 18oz handhelds). At mile 13 and about 2hrs 55 minutes I was beat and about out of water. I just had a few sips of water with electrolytes left. I found a nice campsite with a comfy pine needle flooring and decided to sit down for 4-5 minutes and relax. I hydrated well before hand and was not anywhere near dehydration, but because of the high humidity, I was thirsty. I was wearing a buff around my neck that had became drenched with sweat. While sitting down, I decided to start drinking the sweat out of my buff to help my thirst and give my body some sodium. It didn't taste good, but made me feel much better. I honestly feel I was able to get at least 4oz of fluid, but I'm thinking it could have been more than 8oz. Which now that I'm writing this, I am realizing how disgusting it sounds, sorry. I got up from that hiatus at about 3hrs in to the run and tried to run as much as possible, but there were a few really steep, short climbs that winded me. I began to lose hope at about 3:24 when I saw the sign that pointed towards the trailhead. On this route there is about a 0.25mi (may be much shorter, I'm not positive) trail that connects the trailhead to the loop. I looked at my watch and realized that I could possibly make it so I began running about as fast as I could, after a few steps my legs were cramping and about 30 ft from the sign at the trailhead, I couldn't run and had to walk. I ended my watch right after I tapped the sign at the trailhead. This was my first time doing this trail and it was a nice trail though not many people out there on a Tuesday evening. I ran passed a backpacker at mile 2.5 and that was the last person I saw. The trail was pretty overgrown in most areas as it is middle of summer and the trail crews in the area haven't been as active in part due to COVID. This meant a lot of climbing over and around fallen trees and the spider webs were insanely horrible, but was able to shave 77 seconds (I think) off of the current record so it was a good day.