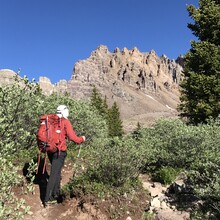 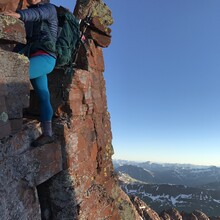 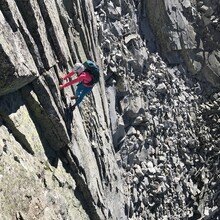 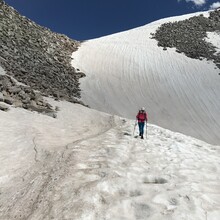 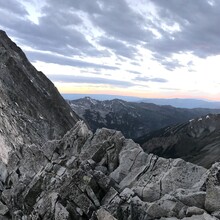 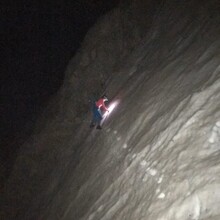 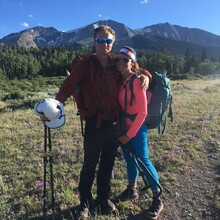 Andrea and I have recently been looking at the Centennials, finding that connecting the 14ers and Centennial 13ers of certain ranges in Colorado makes for some amazing lines in the mountains.  In my opinion one of the best in Colorado is the Centennial Elks Traverse.  It captures the 10 highest peaks of the Elks, and for extra credit you can tack on Mt. Sopris, which surprisingly has the highest base-to-summit rise of any peak in the state.

This route works it way through some of Colorado’s most rugged high peaks and is punctuated by several classic traverses:

We didn’t really have any idea how long this would take, so we decided that we would just hike as far as we could every day and that we would try to get about 4 hours of sleep every night.  We packed our sleeping bags and pads but no tent as the weather looked good for the next few days.  Our packs felt heavy as we were going unsupported for several days.  And we had to pack ice axes because this early in summer there is plenty of snow, however that meant that water would be plentiful.

We started at the Cathedral Trailhead near Ashcroft.  There is a great trail to Cathedral Lake, then another good climber’s trail to get to the summit.  The hardest part of this climb is the steep loose gully that gets you up to the Conundrum->Cathedral ridge.

From Cathedral’s summit Conundrum looks far away.  There was scant information about this traverse online but we knew that our friend Charlie had pulled this off in the 90’s.  He said it took him and his brother 4 hours.  That was the extent of our information.

Near the beginning we lucked out by choosing to go around a tower.  It looked reasonable (moderate 5th class) to ascend, but we chose to lose some elevation and contour around to our right (West) instead.  At first we didn’t know it was a tower, it wasn’t until we traversed to the other side that we saw if we had ascended it we would not have been able to drop down the other side.  We were happy we did not have to descend the 5th class that we had almost decided to climb.

Compared to that, the rest of the traverse was not as scary as we had imagined, with some class 3 and 4 sections.  For the most part the route was obvious, and whenever we were forced off the ridge by towers or cliffs we were generally able to drop to the east to contour around the difficulty.

From Conundrum we headed over to Castle, then returned to the Castle Conundrum Saddle.  Then dropped steeply to the east through loose rock slopes until we reached the Conundrum hot springs trail.  Then we headed up past the sounds of revelry at the hot springs to Triangle pass, then descended a little and were careful not to miss the little trail that leads up and over Copper Pass and down into East Maroon Creek.

It was a little difficult to follow the faint trail that descended for thousands of feet into the drainage, so we had to be careful until we found the main trail down near the creek.  Then the trail continues for a long distance, about 10 miles until reaches it Maroon Lake, however we did not go all the way to Maroon Lake.

About 6 miles down the drainage, after a creek crossing (we removed our shoes and socks and waded across to keep our clothes dry), we headed west straight up an old avalanche path in the trees.  This path took us directly toward the summit of “Lightning Pyramid” a Bicentennial 13er.  We slept for about 4 hours near treeline after it turned dark.

From Pyramid we chose to descend the standard route from the east shoulder.  We had thought about the more rugged route that heads west, but with the big packs on we decided against it.

For the Bells we decided to climb North Maroon via its standard route, then leave our packs at the summit and head over to South Maroon and back.  The obvious disadvantage to this plan was doing the traverse twice, however we figured the advantage of getting a break from the packs and not having to carry them over the traverse outweighed any disadvantages.

After reascending North Maroon, we dropped down the northwest ridge of North Maroon, this is a route that can be easy to screw up and cliff out on.  We took care in our route finding and made our way to an obvious notch at the top of the “Gunsight” couloir. Then we descended west into the remote grassy slopes that stretch upward towards the Snowmass Mountain area and found a place to sleep after it turned dark.

We continued towards Snowmass until we crossed the trail that heads up to Trailrider pass from Snowmass lake.  Then we followed this trail to the top of the pass, dropped a few hundred feet to the south, then left the trail and contoured west until we found the cairned route that marked the standard path up Hagerman peak.  We were dreading the Hagerman->Snowmass traverse as it is rarely climbed and is difficult.  In recent years it was the scene of a fatality caused by a climber trusting the wrong rock.

In my experience Snowmass mountain is a loose, treacherous mountain surrounded by sharp loose rocks ready to give way at the slightest touch.  With all this in our minds, we were nervous as we looked over towards Snowmass.

The difficulties begin immediately as the summit of Hagerman ends in a dramatic cliff that bars the path to Snowmass.  We threaded our way down and around sharp blocks and ledges.  In some places we ended up at a dead end and had to backtrack to find a different way. In the end, we spent almost no time on the actual ridge and basically criss-crossed around the west side of the ridge looking for the path of least resistance.

About halfway to Snowmass the difficulty eases and eventually we picked up the standard route that leads up to Snowmass.

From Snowmass it was time for another massive undertaking, the traverse to Capitol.  I’ve learned the hard way to avoid the Snowmass Capitol connecting ridge in the past, so we chose a route that forms a large S on a map as you drop west from the summit of Snowmass, then cross over to the east side of the the Snowmass Capitol connecting ridge into the Pierre Lakes basin, then ascend the Wandering Dutchman couloir to reach the standard Capitol route near the small summit called K2.  This traverse is basically hours upon hours of boulder hopping.

We ascended Capitol and raced the sun to achieve our goal of making it off Capitol with light.  We returned across the knife edge ridge of Capitol during sunset, then chose a large boulder to sleep on for a few hours after it turned dark.  After a few hours we got up while it was still dark and continued descending to Capitol lake, with some pretty treacherous ice gullies to cross in our way.

From Capitol the Centennial Elks traverse is basically complete…However, our friend James lives in Carbondale, and he told us that from Capitol, Mt. Sopris is “right there”.  With nothing more than that to go off, we decided to top off the adventure by finishing a more complete traverse of the Elks by following the ridge to Mt. Sopris.

Mt. Sopris is amazing in that it doesn’t even reach 13,000 feet, yet like no other 12,000 foot peak in the state it dominates the skyline from the west and north as it rises like a volcano to herald the start of the Elk mountains.  It has the highest base to summit elevation gain in the entire state, which is astounding considering that there are probably around 800 summits that are higher than Sopris in Colorado.

The ridge is a long rolling endeavor and we found that indeed, Sopris is not “right there”.  In fact now when I look at the distance between Sopris and Capitol from other peaks I shake my head at our audacity that day.  We were basically out of food and headed to Sopris anyway.

We were tired and took several naps along the way, but by late afternoon we arrived on Sopris and were surprised to find that one of Andrea’s acquaintances had hiked up to meet us on the summit.  Then we headed down to the trailhead and were thankful that James had driven up to give us a ride back to our car.