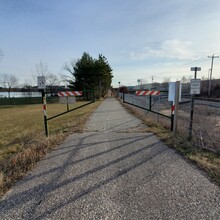 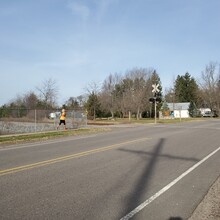 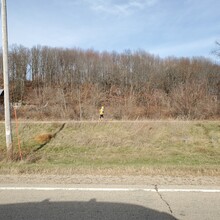 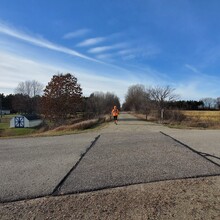 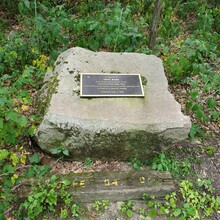 I dedicate this run to Greg Marr!  This Trail stands as a lasting monument to his Vision, Leadership and Steadfast Dedication to fight the good fights in creating an environment for Silent Sports enthusiasts to enjoy and find fulfilling enrichment.  What a great Legacy!  I am glad to have known him through his writings, and our occasional gregarious and inspirational encounters.

--> Beautiful late Autumn day for a run! Sunny & Crispy start! 34F, felt like 25F, 13mph SSE wind that would grow throughout the day with gusts to 35mph. Trail was frosted at the start, remained so in shaded areas for the first few hours, but as the Sun warmed the trail and then the air temp rose into the low 40's, the trail thawed and became soft and a bit mushy, causing me to 'ride the firm rim' of weeds to maintain speed as best I could.  Aside from the trail soft-spots, the only reasons to slow me down were the occasional beatings from the wind, a few chases after a flying hat and a dropped glove, and the general degradation of my body as I dipped into the landscape of 'embrace the suck' over the final 8 miles or so.

Carried everything into the run with me, left nothing on the trail but footsteps and a couple of pit-stops (yes, TMI), and along the way tried to 'smile for the camera' as I passed my wonderful wife who leapfrogged ahead to greet me every 5 miles to make sure I was OK, unwilling to bail, and to cheer me on until the very end, finally picking me up and carrying me into the race-mobile for the ride home. ;-)

Must have been the wind, but only saw two or three birds along the entire route, two humans - one on a Fatty between Plover and Amherst Junction, and a bow hunter dressed in camo, trail-side just past Ogdensburg.  And oh yes, an oncoming train just East of Amherst Junction that startled the bajeebers out of me - I gave them a wave as they approach, and they greeted me back with two long and LOUD blasts of their horn!  Actually, it energized me!  Thanks gang!

The run was fairly uneventful; leaves are now on the ground, standing water covered with a thin sheet of ice, wind-induced clattering of tree branches and rustling of grasses, all filtering through my unrelenting motivational and driving ear-worm that hopped on to power the ride.

Really glad I did this!  In this strange year that has kept me from the frolicking glacial hills of the Kettles, I'm gradually beginning to understand and enjoy solo running these flat trails.

Kudos to the FKT team for guiding and supporting novice FKT runners like me, and thereby providing the motivation to make our own 'Hard-Fought Memorable Races' in 2020!