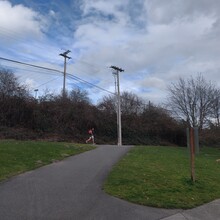 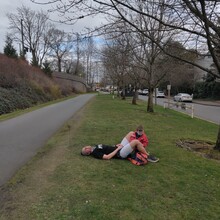 I have had my eye on this run for years and was finally fully committed to doing it mid-February when the big snow storm thwarted my plans. While I awaited a good weekend to go after it, another brave individual took on the unsupported FKT and did phenomenally. My plan was to do the same, but now there was a time to beat. I started/finished at Log Boom Park on the north tip of the lake. I chose this spot because I live very close to that park and could get there on foot. I left my house at dawn and ran the 1.5 miles to the park. I stood at the Log Boom sign on the Burke, started a fresh activity on my Coros watch, and started the run at around 6:30am. I went clockwise so I could take on the largest uphill/downhill of the course at the beginning rather than the end. The Burke is always a good way to finish as it doesn't require much thought. I was very fortunate with weather. Rain was in the forecast but ended up being a beautiful day with blue skies, and temps were very mild, perfect for running. I ran with a Camelbak Mule pack so I could carry lots of water, food, and an extra pair of socks and shirt. I only use this pack when I do long unsupported runs and it comes in handy. I carried Spring energy, Clif bloks and bars, crackers, Nuun tablets, fig bars, pepperoni rolls, and I only needed to refill water once at a public tap about halfway through (in Renton). I was unaccompanied the entire time and had zero support the entire day. My wife and two kids were waiting for me at the finish (I wasn't interested in running home from Log Boom). There is some slight variation between the route mapped here and the Lake Washington loop used by cyclists, and also slight variation even further when using the signs. While this definitely can get confusing, it was overall easy to stay true to the course. One small construction detour added a tenth of a mile or so near 520 on the west side. Otherwise, the route was clear and quite nice. Hope to see many more go after this and bring these times even lower!