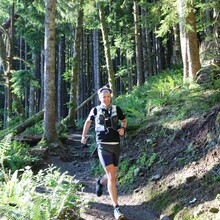 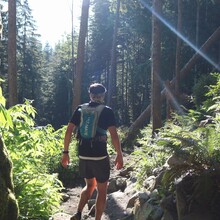 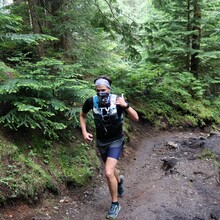 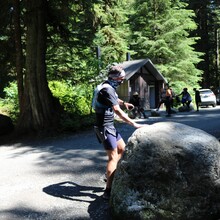 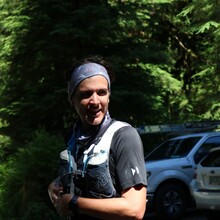 I arrived at Gold Basin campground with my family on Friday, July 24, 2020. The campground is just down the Mountain Loop Highway from the Lake 22 trailhead, which would be the start/finish of my PilTriple FKT attempt. We stayed close to the trailhead so I could get a full night's sleep and an early start to the run to avoid crowded trails as much as possible. I woke up around 4:00 am to get prepared and walked from my campsite to the trailhead around 5:00 am. There is a large rock right at the entrance to the Lake 22 trail that I used as my start/finish marker. At 5:27 am, I slapped the rock, started my watch, and headed up the trail. The sun was just starting to come up as I got to the part of the trail where it opens up to beautiful views of the surrounding mountains. Lake 22 was completely empty and I felt perfectly isolated as I circumnavigated the lake on such a clear morning. I headed back down the trail and only encountered a few other hikers in the last 1/2 mile of the trail. I came right out of the trail (finishing Lake 22 in under 1:12), through the parking lot, and headed west on the Mountain Loop Highway. There is a narrow strip of grass/gravel/dirt on the inside of the highway (opposite from the river) that is fairly convenient to run along. It's not my favorite part of the route, but it's easy to move quickly along this flat section and get it over with (only about a mile long).

Then I reached the Pilchuck access road and began the ascent. The Heather Lake trailhead is not too far up the road, and when I arrived, I saw a few other cars were already there and shot right in to beat the crowds. The trail up to the lake is just shy of 2 miles, but I passed a few groups and still got up there first. I enjoyed another solitary run around the lake and was well on my way back down before encountering any of the first hikers. I finished Heather Lake in about 55 minutes, and was already seeing lots of people arriving as it was already about 8:00 am at this point. I started up the long climb up the access road to the Mount Pilchuck trailhead and was less than enthusiastic about the number of cars heading up the same direction. It was fun to run faster than the cars as many people with low clearance cars gingerly navigated the rough sections of the road. The climb is very long, but the grade isn't terrible and the road is mostly smooth (on foot at least) so it is quite runnable. About halfway up (and about 15-16 miles in) I stopped at a slightly hidden waterfall to filter water with my small Sawyer Squeeze filter I always have in my pack. If you know where it is, there is a clear path that takes you into the thick trees and down to the water (maybe a 20 yard detour). I took 5-6 minutes to filter and jumped back on the road to keep climbing.

I arrived at the Mount Pilchuck trailhead to find a pretty crowded lot. Not so crowded that I would not recommend summitting, but less than ideal for an FKT attempt (but that's what I get for going on a nice weather day). Not to mention, the parking lot is rather large, so it can accommodate a lot of people. From the moment I began passing people on the trail, I was honored to have many people cheer me on as they recognized me as the guy "running up the road". Once I got into the second half of the climb, and the push to the summit, the trail gets rockier, and the crowds grew more dense. My legs were tired from all the climbing, and I kept having to stop. I tried not to rush anyone or force my way passed them, so I found myself walking 6 feet behind groups with my buff covering my face until they were comfortable moving to the side. Running a busy trail can be a lose/lose scenario, but I think it went alright all things considered. The final 100 feet to the fire lookout involved waiting in line to be able to climb the ladder. I climbed it, tagged the fire lookout, and then headed straight back down before I got caught in another backlog. I did take one photo from the boulders right next to fire lookout as I waited and can be seen on my Strava activity.

The way back down was very slow. It is a technical trail and hard to run, but I tried to be courteous and give the uphill hikers the right of way unless they waved me on. This meant a lot of waiting on the side of the trail in an effort to social distance. Plus, a lot of people wanted to ask me what I was doing since they had now seen me three times (on the road, going up the trail, and no back down). There was a lot of task juggling while on this 5-mile section of the route, but it was a beautiful day and I was still very happy to be up there. I ended up filtering one more time in the stream almost to the bottom of the trail. With full bottles, I was ready to hit the access road and hammer out those last miles.

By the time I reached the access road to run back down, I was feeling pretty sore and tired. Fortunately, these miles weren't technical, so I could let my body settle into a controlled fall and was able to sustain approx 9 min/miles going down. As I passed the Heather Lake trailhead, I couldn't believe how many cars were there and was grateful I planned to start as early as I did.

I finished the run in 6:35:24. Not quite as fast as I had hoped, and genuinely hoping to see others come knock out a faster time! I ran the whole thing solo and unsupported. My family cheered me on from a few different spots and snapped some pictures, but no support was provided. I carried all of my food/gear the whole way and did not re-supply. All water was either the water I started with or filtered from streams along the way.