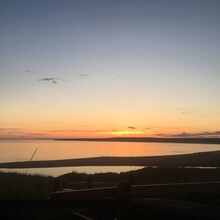 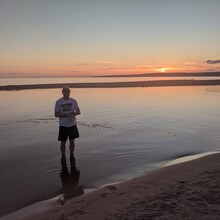 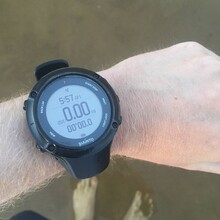 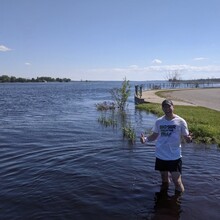 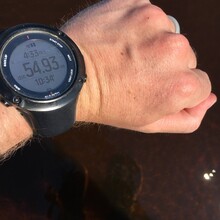 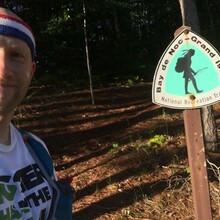 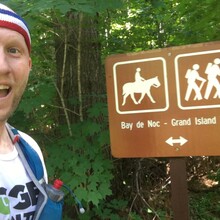 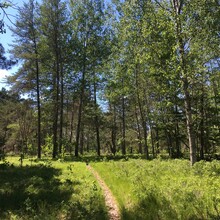 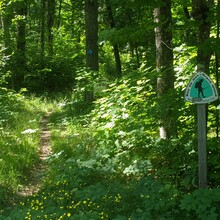 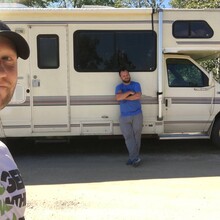 Started at Autrain beach in Lake Superior at 5:57am. Headed south on Autrain Forest Lake Rd then east on M-94 for a total of 10.5 road miles to the North Bay de Noc trailhead.

From the South trailhead, I followed a dirt road southwest to Hwy 2 and headed west to Rapid River. I went south on Main street to Hubbard Ave that leads to Public boat launch, which is where I ended in Lake Michigan for a total time of 10h34m30s roughly cutting the previous Lake to Lake FKT in half.

Natural landmark to landmark routes have always intrigued me, so when I discovered this route, I decided to give it a go. I choose to run north to south mostly because of the elevation profile and so I could drive up the route the day before and check out the road segments, trailheads and connection points.

I also decided to start and finish in the water, because if you're going to run from one great lake to another, you ought to get your feet wet! Autrain beach was the logical starting point on the Superior side and I chose the public boat launch on the southern side that accessed the Little Bay de Noc as the bay is part of Lake Michigan and it's a public location anyone could access. (Note: the original FKT hike didn't indicate a specific location for accessing Lake Michigan, but rather a river closer to the trailhead that fed into Lake Michigan. I opted to add a couple miles of road to get to the actual lake).

We arrived at Autrain beach right before sunrise to incredible views over Lake Superior. It was mid 50s and perfect conditions. I got into the lake barefoot as I was not about to start this day off with wet sandy shoes. Just as the sun came up, I started my journey south. After a 40 yard dash to the RV to rinse my feet and get shoes on, I started the first 10.5 mile road section. Even though this is a road section, it's still somewhat scenic as it weaves through the Hiawatha National forest and passes Au Train Lake. Once on M-94 there is more traffic, but the roads have wide shoulders safe to run on. For those who prefer not to run on the roads, but more trail, there is another option to access the north trailhead using a section of the North Country Trail and a connector trail.

I arrive at the north trailhead parking lot, got filled up on water and food and start south on the Bay de Noc trail. As the trail weaves south, it crosses several roads which we decided to use as connection points to restock my water/fuel. The forecast for the day was hot and humid, so I would need water often. We met roughly every 4 to 6 miles. My friend relied mostly on printed maps of the trail and roads since there is zero cell phone service in the forest.

Apart from filling up, I also got sprayed down with bug spray regularly. We learned the day before while scouting the route, that the mosquitoes are out of control. Strong bug spray did the trick for mosquitoes but I still had roughly a dozen ticks on me by the end of the day. I also used deerfly patches on my pack to trap the flies and keep them from biting me.

The trail itself was mostly easy to follow with blue diamond blazes fixed to trees some with milage marked on them. Parts of the trail in the north half were overgrown with ferns and tall grass, but following the trail wasn't too hard. Only in a few places were there downed trees in dense forest that covered the trail and made it difficult to navigate. I had loaded the GPX file of the route into my Gaia app and it got me back on track both times when I got mixed up. Beyond that, the trail is a mix of single track and wide track and is fairly well marked.

After finishing the trail and reaching the southern trailhead, I only had 4 miles of road to go to Lake Michigan. These road sections aren't nearly as scenic as they include a highway and navigate through town. When I arrived at the boat launch I was glad to see no one there so I just ran right into the lake, stopped my watch and took a swim!

Overall, this was a very hot, humid and hard run mostly because of the weather conditions, but a fun challenge and a unique route. Probably best done in fall when it's cooler, any downed trees have been cleared and there's a lot less bugs.