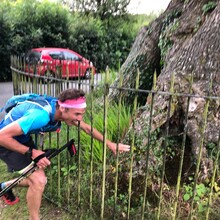 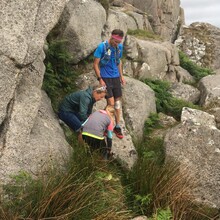 Some people consider the round to be Sheepstor to Sheepstor (for which my time was 15hrs21mins).

I believe the round to start and finish at the Meavy Royal Oak (the pub or the tree!) for which my time was 16hrs11mins09secs.

Started from Meavy Royal Oak at 03:56 hrs. Dense fog. Very poor visibility for the first 4 hours due to a combination of fog and, initially, darkness. Heavy going across the bogs around Hare Tor and down to the Meavy crossing. Very wet. Jon met me at Brat Tor, about 30 km in, with a hot cup of tea and a flap jack. After Branscombe Loaf the clag started to lift and visibility generally improved. Unfortunately I went through the next two support stops (the stone circles near Gidleigh and Bennett's Cross) ahead of time and the crew weren't there. So I started to run low on water and food and had to drink from streams as the sun came out and it started to heat up. Lovely running down the 2MW through the Hameldown area - dry underfoot - and met up with the support crew at the road crossing before Sharp Tor and then again in the Dartmeet car park to pick up much needed food and drink and change socks. Then a longs log up to Coombestone Tor and Ryder's Hill. Fairly boggy again, as expected, on the crossing on to Puper's Hill. Legs began to feel it on the hard surfaces down towards Shipley Bridge - but there were ice lollies there. Enjoyed the shady climb up the green lane towards Corringdon Ball. On towards Western Beacon and back along the ridge, again, struggling on the hard stony surface before the steep descent to the Erme and the steep ascent out of it. Met by Tim, Will and Ben at Stalldown Barrow. Over some tricky, tussocky, terrain to Great Trowlesworthy Tor for one last food stop. Then home via Gutter Tor and Sheepstor - absolutely loved standing on Sheepstor in the evening sun knowing it was just a few downhill km to the end. Back in time for a drink in the pub garden.

Major Jon for camping out to meet me with a hot brew at 0715hrs.

Suzy, Holly and Daisy, for driving round Dartmoor in our campervan trying to meet me to feed and water me.

Ben, Will and Tim, for meeting me at Stalldown Barrow for the last 20 km.

Ben for his help on two recces.

Suzy for dropping me off at a recce at the crack of dawn once.

Jo, for coming out to support on the day at Dartmeet.

All those who've posted the runs on Strava that helped build the heat maps I used to develop the route.

Jon Croome, for his article in Fellrunner about his attempt.

And, of course, Nigel Jenkins for the original inspiration. His winter round was a heroic run!

And everyone who helps to maintain the wilderness and spirit and joy of Dartmoor. Thank you.