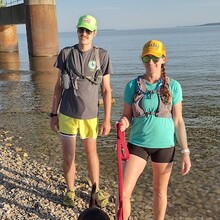 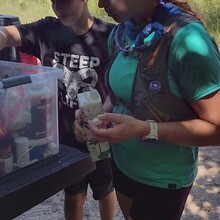 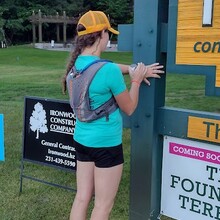 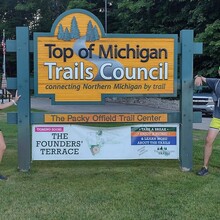 On July 16, 2022, I ran the North Country Trail section between Mackinaw City, and Petoskey, MI.  I ran with Andrew Broton, supported by our spouses, and my son.  We started in Mackinaw City at 7:21 AM, and ended in Petoskey 12:56:54 later.  The weather started out in the high 50's, and reached upper 70's as the day went on, humidity hung around 85%.  I believe we added a little bit of extra distance in Wilderness State Park, by following the trail section NW of Canada Goose Pond, instead of following the trail south.  We had a bit of confusion due to a trail race that was flagged along the trail, and we followed the flagged course around the wrong side of the lake.  We also followed a recent re-route of the trail due to Bliss Fest Music Festival, that may differ slightly from the original route, but we felt it best to follow the posted trail, knowing this area travels through private property.  Our crew supplied us with water and food at multiple places along the way, there are many accessible spots along this trail.  We also encountered a couple spots along the trail where trail angels had left gallons of water out for trail users, but I wouldn't count on those being there on a regular basis. Overall, this trail is very runnable, was well marked, pretty, with a few road sections thrown in that were kind of miserable due to the heat.