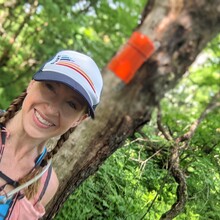 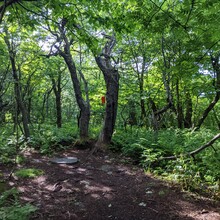 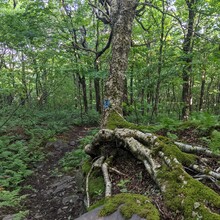 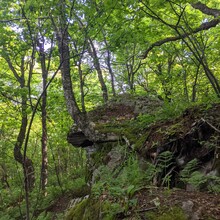 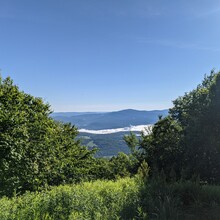 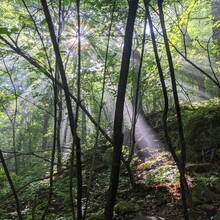 Who would enjoy running this FKT route? Someone who wants a short and sweet FKT course with mostly runnable terrain, a nice descent, and some non-sketchy-climb conditions. If you don't care about summit views or technical trail challenges, and don't want a double digit mileage day, this is a good pick. If you shine on descents, I recommended hitting up Vly first and ending with Bearpen which will afford a more seamless downhill. I went the opposite and started with Bearpen but in hindsight, I would've done Vly first.

Trail conditions: I arrived on Co. Rd. 3 around 6:25am to no other cars or people around. The day was mild, high 50s/low 60s, a little humid so not ideal run conditions, but also not horrible. Bugs weren't a problem at all but I sprayed anyways bc I knew some parts of the trail would be overgrown. The gravel road up to the cabin was nice and as expected for a loose gravel road. The trail to Bearpen was overgrown in parts but mostly just ferns and other non-stinging flora, ha! A few nettles along the route kept me focused and watching my footing. Several muddy spots along the trek to bearpen slowed me down but wouldn't even phase someone better running in mud. Vly was nice and relatively dry and the trail was nice and clear. I enjoyed the break from all runnable trail for a few big steps up rocks and roots, but nothing ever became technical enough to feel unsafe out there solo. Running downhill off of Bearpen is much easier than descending Vly, and the gravel road is a great place to let loose a nice send.

Run report: My word of the day was "fearless" even though I was really a bundle of nerves over this run. My first solo catskills run, two mountains I haven't traversed before, and lots of recent social media posts about bears, stinging nettles, and rattlesnakes - all of those things were amping up my anxieties. Despite telling myself throughout the entire run that I cannot run with fear, I have to be fearless, I still played it way too safe going up Bearpen's overgrown trail sections. Lost so much time tiptoeing along ferns when I should've been mooooving. I had a blast coming down from Bearpen, such a fun downhill through the fern-kissed trail and then started my climb up Vly. The terrain changes on Vly, more rocky, more steep rocky climbs and it started to kick my butt. I regretted not doing Vly first. The cannister on Vly was easy to spot and the trail on Vly was easier to follow for me than Bearpen (where I wanted to turn wrong off the single track both on the ascent and descent 🤦‍♀️). Because I was alone, I held back a bit on the descent of Vly, more wasted time, but once I reached the gravel I tried to let go and still get a decent time for myself. Lots of lessons learned on this trek - I have to trust myself and not hold back early in my runs. But a fun day, great trail, short and sweet FKT Attempt! I can't wait to see what the next woman will post - LOTS of places to improve on my time.