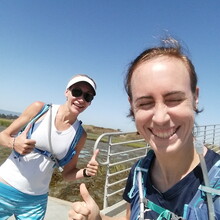 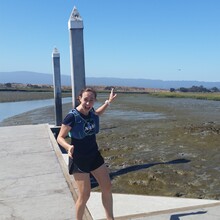 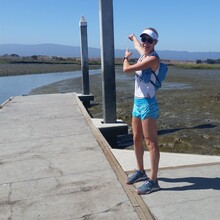 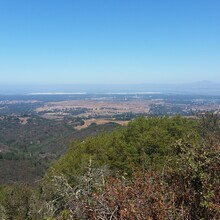 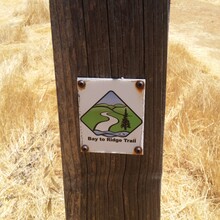 Ann Marie had been wanting to do the uphill-only Bay to Ridge route for about a year, but until recently, part of it was one-way (in the wrong direction) due to covid-19 pandemic rules. She didn't want to encounter angry hikers, so the FKT simply went on the bucket list after a couple short recon runs. Finally in summer 2021 the route fully reopened, but by this time she had forgotten its twists and turns. So she decided to do a "chill" (haha!) version with the focus on navigation as opposed to speed. The goal was to set a baseline ladies' uphill FKT. A perfect opportunity arose on August 9th, as she had some steam to blow off after a work meeting. Turned out friend Emily likewise had excuses to run off into the mountains. A text message was sent the morning of, both parties agreed to embark on the adventure, and by 10:30am they were dressed and ready to go! Circumstances were a bit questionable, involving late morning heat and dead legs from previous runs, but hey- what could go wrong?! We proceeded to the starting dock at 10:45 and took the obligatory selfies (pointing at the ridge where we were to run). Started our watches simultaneously, and off we went... Ann Marie carried 70oz of fluids in her Nathan vest, while Emily had a bit less. We forgot whether filling up at fountains was allowed, so just stuck with what he had for the duration.

The initial road miles ticked by with pleasant conversation. It didn't really feel hot until we reached Arastradero, where the sun beat down and the uphills started. Foothills Park provided a bit more shade, though was even steeper. We did a bit of power hiking. At some point between miles 10 and 12, Emily began to regret having done an 11+ miler with a bunch of climbing the previous day. On the plus side, Ann Marie ensured that there were no rattlers or mountain lions in the way. The top portion of the route was a bit more pleasant, with some flats and gently rolling hills.

Before we knew it, we were up by Page Mill Road and quickly approaching the entrance to Monte Bello. Navigator Ann Marie could tell that Emily was flagging a bit, so she told a fib and announced that the last 1.5 miles were completely downhill. Ooops. Somehow both runners managed to make it to the finishing gate on Skyline without getting injured, overly dehydrated, or bitten by anything. However, we were so overjoyed to have completed our journey that we forgot to take any photos at this point. We dragged ourselves to a waiting car and enjoyed the winding drive back down, amazed by all the people who have done this route both out and back.

Hopefully others will now be inspired to try out this great one-way variation! Until next time... see you out there.