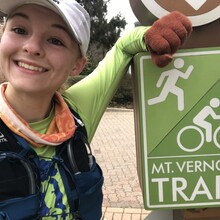 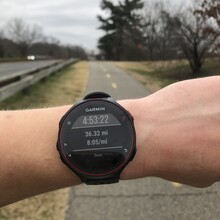 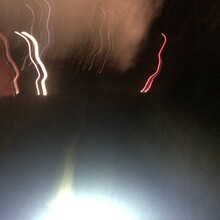 Completely understand if this doesn't count considering my Garmin decided today of all days it would not include GPS data in the file (this is a known bug see here: https://forums.garmin.com/apps-software/mobile-apps-web/f/garmin-connec…. Absolutely stellar run, though. Started out from Crystal City, went up to the Key Bridge, down to Mount Vernon, and ended in Crystal City. Flurries for the first couple of hours and a little bit of ice on some of the pedestrian bridges, but other than that no major issues after Wednesday's winter storm. Had never been South of the 7 mile mark before and man oh man does it get hilly down there, felt excellent on the hills though and they honestly broke up some of the monotony of the run. Completely solo effort, probably saw about as many people on the trail as I did miles (which is to say not many). Brought my Salomon vest and two packs of sports beans plus two packs of vanilla gu. Took the gus at 13 and 26 and the sports beans in between. Very little wind made this pleasant, but there was a bit of a headwind coming back up through Alexandria (or I was just really tired). Hopefully the lack of GPS data doesn't tank this, but completely understand if it does.