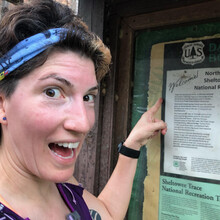 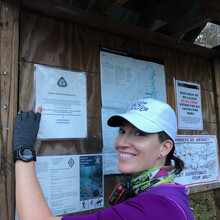 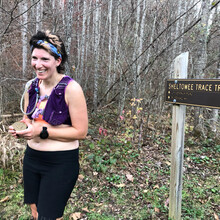 I completed the Sheltowee Trace Trail going NOBO 11/1-11/9/20 and was supported by my husband and 8 year old daughter. The Sheltowee Trace Trail continues to grow and as of this year's version is now up to 341 miles, up even from 2019's 333 mile route. A planned extension will increase the route's length to 354 miles in the near future. I experienced temperatures in the 20's at night during the first half, and temps in the 80s during the day in second half. This is my second attempt at this FKT, with my 2019 effort ending due to high water at Horse Lick Creek. This year's water levels were much lower and I was astounded at the difference some rain makes! I had some GI issues that slowed me down at times but didn't have any major navigational time sucks like I did in 2019. The southern half of the Sheltowee is quite different then the Northern and I think if I were to do it again I would do it NOBO again because I think the trail is harder to follow in the south and would be more so with sleep deprivation. This route has a lot of everything and I think makes for a well rounded FKT experience: single track, double track, atv trails, dirt roads, black top, flat, hilly. While I ran supported by my family, I did not have any pacers or mules. I'm proud to be the first female to complete this route, but hope I'm not the only one for long.

I recorded a more in depth trip report via podcast on BRF Barf (BRF = Best Running Friends and Barf = well... puking). You can listen here or wherever you get your podcasts: https://soundcloud.com/brf-barf/64-sheltowee-fkt-attempt-two. There's also an episode about my failed first attempt in 2019:  https://soundcloud.com/brf-barf/45-sheltowee-trail-fkt