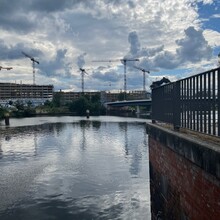 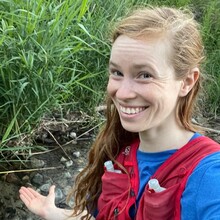 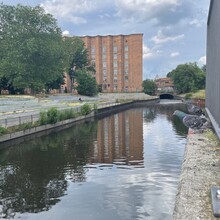 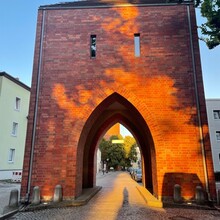 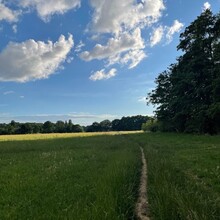 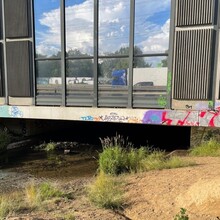 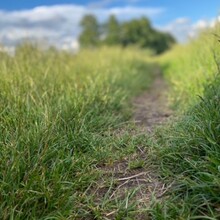 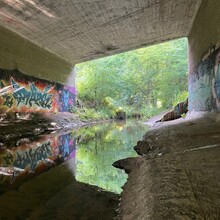 Before I begin, let me note that the official FKT route does not end at the actual end of the Panke - which is why I have subtracted KM 29 (8:10, time in min:sec), 30 (10:10), and 31 (9:43) from my total time - those are from my wandering search for the stream end, with my watch still turned on. I apologize to Michael, who has to go through that mess of a time track. ^^ I have also subtracted the first kilometer (time: 6:12) as that was from my work to the start of the run. I did not subtract the second one as the run started kinda in the middle there.

These subtracted times add up to 34:15, which I have subtracted from the total elapsed time as displayed on Strava.

Please don't kill me for being like this, I'm just trying to make things as accurate as possible for the next runner. :D

I always thought the Panke flowed past the BND (the German spy agency), but this run finally showed me that I actually cycle past its end each day to work. The stream ends in the river Spree in Mitte, and from here on we go backwards. Through Wedding (love this part, so many parks to amble through, and a water station set exactly on the route). Then moving on through Pankow, Karow (that part is a bit weird, past small gardens and underneath a highway pass... well, I do love me a bit of scrambling). And then, eventually, the Panketal, which was as pretty as ever. I chatted with my brother on the phone for a bit, while he was taking his baby out for a run (in the stroller, the baby is not yet a runner, but we're working on it). It was the smoothest sailing I've had in a while! 1L of water packed, 2 bananas and two fruit snack bars and the usual Döner at the end.

I do recommend though to go through the effort of doing the extra 3K after reaching the official route end to see the actual start of the Panke: a tiny trickle coming out of the Teufelspfuhl. Pretty neat to see how much water it collects on its 30K run through till Berlin Mitte!

9/10 stars, would run again (but only with friends this time, I've done it alone often enough). ;)