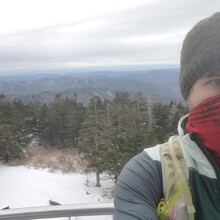 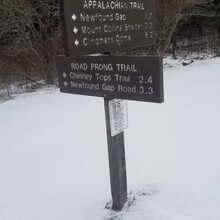 I wanted to climb Clingmans to get as high as I could in the Appalachians while training for the Grand Canyon Rim-to-Rim-to-Rim but the Hwy 441 that leads to Newfound Gap has been closed due to snow and ice. With the road closed the only way to get to newfound was to run the 13 miles up from Smokemont where the road closes first. I camped 1/16 at Somkemont and ran up to Newfound in the snow but I didn't have enough daylight left to attempt the round trip to Clingmans. I camped again 1/29 and attempted the run again earlier before dawn, this time I also ran the first stretch up to Newfound gap faster. With plenty of daylight left I began the round trip to Clingmans and lapped my Garmin, 3:25:18 and the sign on the side of Hwy 441 read Clingmans Dome 7.9 miles.

There was a few inches of snow on the ground and cloudy skies, I made my way along the ridge running as much as I safely could. After the first up and downhill the trail climbs up into a forest of dying trees, many huge trees uprooted and fallen over, strange and eerie especially covered in snow. I passed a couple small running streams and made mental notes for water on the way back (I had not refiled my 1.5L hydration pack yet) as I ran along and approached closer to my daylight half way point to turn around I began to worry that I would not make it all the way to the top, then I saw through the woods a spiral ramp and realized I had just made it. I'd never been so happy to see a ramp before. The ramp was icy so I carefully climbed up and took a video at the top, turned on my phone and text my wife that I had made it before carefully walking back down. I had stopped moving enough for my fingers to get cold. To my disappointment my Foreman 45 was close to dying just over 6 hours in (though it is rated for 12 hours GPS). I took it off and charged it with my biolite for about an hour as I walked back down.

On the way back towards Newfound gap I stopped at a small water source running across the trail. I refilled my hydration packing using my Sawyer mini filter while chatting with the through-hiker I passed on the way up who had also stopped there. This was a little more than halfway back, I had 3 miles to go until I was back at the road. As I got closer I could tell the road had reopened, there were cars driving on Hwy 441 now. As I made it back to the sign and road crossing the parking lot was now packed, the time on my GPS was 8:16:02 but I forgot to lap it again until I was ready to walk back down to the camp 4 minutes later. total time up & down to Clingmans was 04:50:44.

A snowstorm blew in just as I left the road and started back on the AT, I had 13 miles to go back to my truck and there was no faster way and only 3 hours of daylight so I had no choice but to power through and stay moving. I had packed 2,650 calories in bars and gels so I had enough nutrition and there was ample water within the last 5 miles but I also had a 3 hours drive so I wanted to get to my truck as close to dusk as possible. The snow let up after 3 miles and the run down to Smokemont went fast, I ran the last mile into camp below a beautiful sunset on fresh snow.