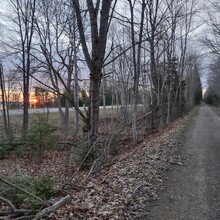 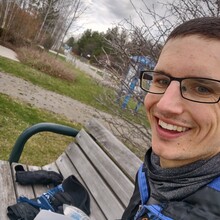 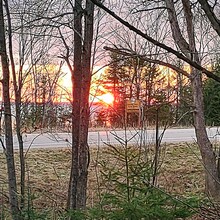 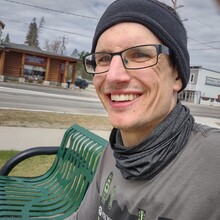 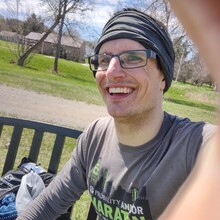 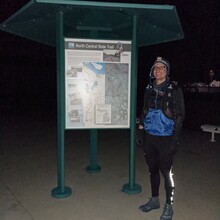 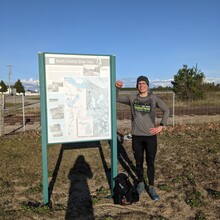 I had an issue with my knee that made it so I was unable to run for most of December 2020. By early January, I was able to start building up mileage. I gradually worked up to ~70 miles a week throughout most of March. I was doing cross training on Mondays, tempo runs on Tuesday/Thursdays, easy run on Wednesdays, long run on Saturdays, and a moderate length run on Sundays . During this block, I was also doing some strength training based on information from David and Megan Roche's Happy Runner.

Toward the end of last year I also started paying more attention to cadence and found that I was usually averaging around 150 steps per minute on my typical training runs. Since then, I have been trying to gradually increase that number. I worked up to close to 160 for most of this training block and am planning to work that number up for future blocks.

I had attempted this same route, in the opposite direction, back in August of last year and had to give up about 46 miles into it after dealing with dehydration due to not having enough water to work through the heat.

I was thinking the route was going to take me between 12 to 16 hours to complete so I setup my pack to have all the food I would need for 17 hours just to be on the safe side. I have done a couple other ultras and have had luck with rotating peanuts, energy gels, and bits of a Clif bar around every 20 minutes, so I used that same strategy for this event. I used the Salomon Adv Skin 12 which had enough room for that food, some first aid supplies, and my 0.6L Katadyn BeFree. I filled up the two 0.5L soft flasks and the Katadyn before starting.

For my attempt in August 2020, I filled up water bottles at drinking fountains along the way. The water fountains were not turned on during this attempt, so I had to rely on pulling water from rivers and lakes with the Katadyn.

The temperatures were going to go from cloudy and 32F in the morning up to 55F and sunny at the hottest part of the day. I started with a warm hat, jacket, and gloves with the plan that I would eventually take off as it got warmer out.

I didn't set any goal time, because I did not want to have any reason to push the pace beyond what I was finding comfortable at the time.

During last year's failed attempt I ran from Gaylord up to Mackinaw City since getting to finish in front of the Mackinaw Bridge seemed like a nice way to close out the day. This time I went Mackinaw City to Gaylord since Gaylord had better post-run vegetarian food options open at the time. The trail is pretty flat so it didn't make a big difference to me running-wise which direction I ran it.

My wife dropped me off at 5am at the trailhead. I started out with a plan of alternating 9 minutes of running and 1 minute of walking. The entire trail is flat so I wanted some ability to mix in walking since there are no hills to hike up. This section was just a straight shot with some trees on either side of the path and the occasional views of Lake Huron. It was rather uneventful as I was able to stick to my eating and drinking plan and kept the pace easy. Highlights included a beautiful sunrise and numerous deer, raccoon, and turkey spottings.

In Cheboygan, there was a nice facility next to the path that had benches and, in the warmer months, a drinking fountain and bathroom. I used this as an opportunity to switch out my warmer hat and gloves with some lighter ones. I also refilled my two front bottles with what I had stored up in the Katadyn.

Most of this stretch runs along Mullet Lake. The sun started to poke out and there were tons of beachy segments with minimal shade. I was able to find a public boat launch into Mullet Lake where I used the Katadyn to refill all my bottles. I ended up getting one foot soaked, which was a little annoying for a few miles, but then it dried out.

There was a nice spot to stop and sit along the path in Topinabee, but I ended up moving past since Indian River was not far ahead and I had just made a stop to fill up bottles. I was able to mostly keep up my pace and eating plan, but started working in some more frequent stretching as I was starting to get more sore.

My pace started slowing down a bit here as I was starting to have a tougher time taking in enough water and eating with the heat. I feel like 55F and sunny is probably not too hot for most people, but to a person who had been been training through a Michigan winter the past few months it was hitting me hard. I stopped at the Rondo bridge to sit down, refill all the water bottles, and move some food around.

This is where I really started to have some issues. The sun was beating down pretty hard and I was having a tough time finding a spot to refill water. I was trying to make my water stretch out as best I could, but was definitely not taking in the water I needed. During this time, I kept increasing the amount of time I was walking relative to running. Just as I was switching to only walking, I ended up finding a creek in the shade that looked like it was moving just quickly enough to be alright to filter. I ended up spending some time just sitting in the shade and trying to catch up on food and water intake.

After the break, I started to feel better as I got more water into my system. I was ended up working back to an 8 minute run and 2 minute walk plan.

I took one last sitting break in Vanderbilt to recover, shuffle some food/trash around my pack, and move the water from the Katadyn to the front bottles. At this point, my legs were pretty sore. I was getting occasional cramps in my thighs and calves that I was able to walk and stretch my way out of. Besides the cramps, I was able to push through with a relatively consistent 4 minutes of running and 1 minute of walking. I had a group of cows come right up to their feeble-looking fence along the path and stare at me, which made me slow to a cautious walk as I passed them.

After a long day, the idea of just being done took over and I ended up picking up the pace to run my quickest pace of the day and was greeted by my wife with some water, fresh snacks, and new clothes.

We got takeout from Snowbelt Brewery. I got a tater tot waffle covered in mac and cheese. I had a tough time sleeping between feeling too hot or too cold and just general soreness. I was pretty sore the whole next day, but doing some walking, stretching, and using a massager on my legs helped me feel quite a bit better by the end of the day. The next day I went on a 2 mile run and that really helped speed up the recovery.

I plan on submit the activity to fastestknowntime.com.

Made with a new race report generator created by /u/herumph.

One final thing I wanted to note: when this FKT was originally established, the North Central State Trail ended at the Gaylord trailhead by the soccer fields. The trail has now been extended to go all the way down to Waters. If you look at this route on Google Maps or something similar, you will see the the North Central State Trail extends further south beyond where I ended. I stuck with the route the originator described in their report.