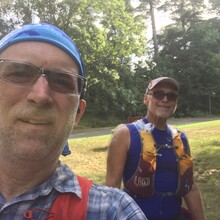 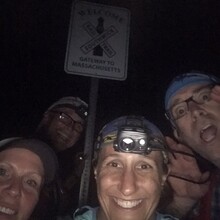 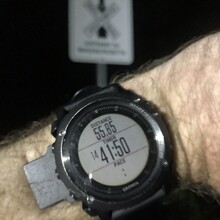 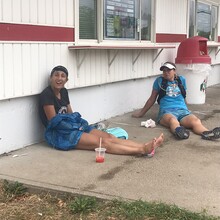 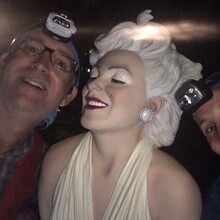 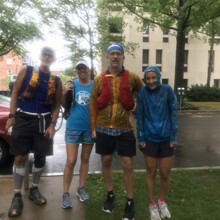 Have always wanted to run this 57 mile route since Brian Roccapriore and Andy O did it in 2017. However I noticed that to my knowledge, no one had ever done an out and back from New Haven to Southwick. I reached out to the members of the Cultra Trail Running Podcast Crew, Becky Burke, and Fred Murolo, plus Reagan Fitzgibbons. They are all quite experienced, and we decided on about 10 days notice, to run this. I did not really know where it started or ended, but Fred and Becky had run it before and with some additional help from Andy O we cobbled a plan together.
Our style was primarily self supported, as we left 3 cars on the trail, one at mile 15/97, one at 35/85 and one 15 miles away. However I left my car at the wrong spot, which resulted in us having to travel a one time round trip of 25 miles.
The trail was paved and easy tp follow. Our gang of 4 decided to stick together. The day was a comparatively nice weather, with the temps in the low 80s, and some rain on Sunday Morning.
The early part of the day went well and we coincidentally saw Alex McDaniel, Tom (The Destroyer) Starodaj, and Michelle "Pom Pom" O'Neil at different parts of the trail. We decided to run and finish together with the goal of having all of us finish.
We saw a bear on the trail in Simsbury, and Christmas Lights at around 3:00AM. The worst part of the run was the Plainville road section which is a few miles of angry drivers, in loud smelly cars. But you do get to run by 3 Dunkin Dounuts. All was going as planned until we reached our last car 5 miles sooner than expected. This meant that we would have to carry enough to go 25 miles instead of the 15 miles we had expected. We helped each other on the trail and were able to experience the miracle of resurrection that happens when one goes from being physically and mentally bankrupt to a superstar in a few minutes. We understand that many could do this faster, and hope that we bring attention to this route. We made the turnaround at 14:41, and headed back. Thanks for the Payday JM! Thanks for talking me back to reality Amy Sorensen. Thanks to my wife Peggy for driving to shuttle cars, and putting up with the bs.