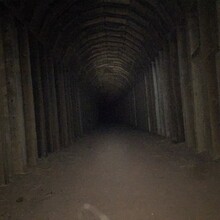 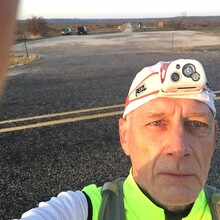 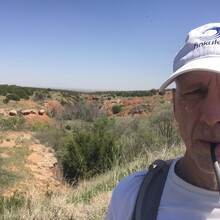 Route Conditions:  On this self-supported attempt of the Caprock Canyons Trailway, conditions were mostly excellent.

Who is this course for?:  IMO, anyone who wishes to set a PR on a non-pavement route that is at least 100 km in distance.

The FKT was West to East from the South Plains Terminal to Estelline Terminal, and measured 64.5 miles as per my tracking devices.  I was dropped off at SP Terminal, and started promptly at 4:00am.  Winds (mostly tailwinds) were kicking throughout the day, and were appreciated as the day got hotter.

Having never run this far (previous long was the Austin Rattler at 41 miles), my intentions were to run my (perceived) forever pace, but as it turned out, after a few miles I realized my pace was marginally faster.  Still, I felt good, so decided to maintain that pace, to test my limits a bit more.  My original goal was to move slowly, and just complete the distance.  After the first cache point I had a better feel for pace, and after some recalculation, I decided to run a moving-average pace such that my overall pace was less than 12 min/mile.  These are approximations, but at first my pace was roughly 10:15, then 11:15ish later in the day.

I saw absolutely no one throughout the day, with the exception of a backpacker(s)  at mile 7 who were evidently still asleep in their tent, a couple of MTBers just past Clarity Tunnel who were still asleep in a trailside hut, and two or three farmers later in the day.

The predawn running was most enjoyable, and the trailway is very runnable.  The first section is through canyons and is arguably the prettiest.  I of course saw none of it in the pitch black.  I saw one racoon, a few cows, several sets of mule deer, bats, and one porcupine before dawn.  Later in the day I saw various birds, more mule deer, a couple of whitetail deer, and an assortment of reptiles.  I got to Clarity Tunnel (mile 12.5).  There were hundreds of bats in the tunnel, and the ground was ankle deep in powdery dry dirt, and of course, bat guano.  As I had mentioned, the winds were howling, and all was good until a gust of wind blew through the tunnel from behind.  The dust then blew ahead of me, making it difficult to see.  With the promise of fresh air, and covering my nose and mouth as best I could, I sprinted as best as one can in those conditions until exiting the tunnel.  This all could have been avoided had I walked slow enough not to stir up dust.

A few miles after the tunnel, the canyons make way for cattle pasture, then mostly rolling hay fields before the town of Quitaque (22 miles).  East of Turkey, the route will take you through many cotton fields.  Nearing Turkey, all was good through 30 miles, then my hip flexors began to hurt.  I had been managing some left hip and right side groin pain, but the hip flexors  were more concerning.  So at the second cache at Turkey Depot (33 miles) I took four Advil, then started off again, slowly, just trying to manage pain.

Another mile down the path, preoccupied with hip flexors, I suddenly noticed movement four foot in front of me.  This movement materialized into a rattlesnake.  The rattlesnake immediately began coiling and rattling, ready to strike.  One more step would have been on the rattler or inches from its head.  Luckily, I was able to plant, alter course, and curse before a truly intimate encounter.  Strangely, just after that, my hip flexor pain was completely gone; not sure if it was the Advil or the rattlesnake, or a combination thereof.

The rest of the run was simply about managing ever increasing pain levels that I would assume all distance runners experience.  For me that meant, stomach issues, groin, hips, stiffened knees, and eventually more flexor pain.  Running was no longer an autonomous task, but required conscious effort to maintain pace.  I guess that’s why the last few miles seemed to take forever.  But in the end, my trusty Forerunner logged 11:46 min/mile, and all was good.

Special Thanks:  Many thanks goes to my wife Pam (who is a better runner than I), who dropped me off in the wee hours of the morning,  and picked me up with pizza and beer on hand!