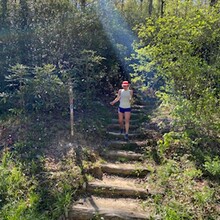 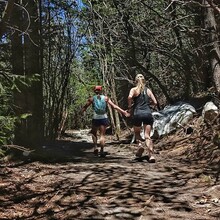 I started at the Davidson River campground just after 8:30 a.m. It was a clear, beautiful Saturday and so the parking lot was already full. I started on the pavement (before the gravel) just to be sure I ran the entire segment. It's a bit under a mile before a sharp right turn across the creek and up. I spent an hour or so without seeing more than a couple of people, and then ran into several groups of backpackers. I felt terrible on all of the climbs (unusual for me, because climbs are usually my favorite), but just kept moving forward. David, Ginna, Holly and Mark met me at Gloucester Gap to refill water and Gu. Apparently I didn't drink much water. .... This would later prove to be problematic as I worked hard to stave off cramps the remainder of the run. Thankfully David had a coconut water for me at Black Balsam. But still. It was a lot of working to repent cramping rather than running hard. That said, I had a blast (a good bit of the time)! Several friends met me along the way to share some miles and cheer me on. All in all, it was a beautiful day in the Western North Carolina High Country on my favorite trail.