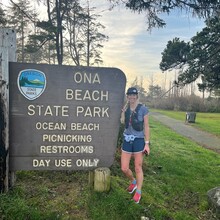 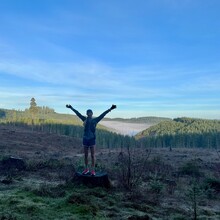 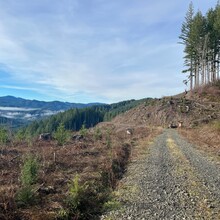 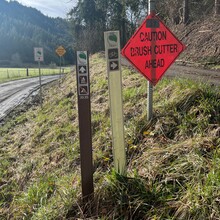 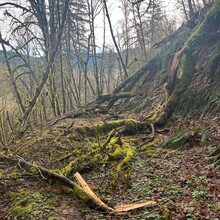 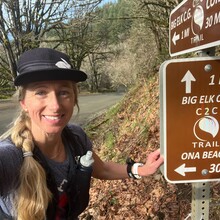 I had wanted to do this trail at the end of December for my birthday, but then much of Oregon (coast included) got hit with a snowstorm, so the trails became unpassable. When my family agreed to hit the coast for MLK weekend, I decided to give this trail a go. Last March a friend and I ran the entire hiker's route of the C2Sea before it became an FKT, and I loved the concept of running from Corvallis (where I grew up) to the coast. For this time around, I was going solo, but I ran it as supported so my husband could jump in on parts with his bike. I carried all my own gear, with one resupply of water and Coke in Harlan. I carried with me a pack with a water filter, a soft flask, food, a Garmin Inreach, whistle, headlamp, pepper spray, and the clothes I shed along the way. I wore road shoes, which I only regretted on a few extra muddy sections.

I began the trail at 6:39 AM in total fog. I was actually worried I might miss a turn because I could barely see, even with a headlamp. If I had not done the route last year, I would have doubted myself multiple times, as I could not even see the C2S markers until the sun came up. My husband met me along Old Peak road with his gravel bike. Last year we had missed this turnoff due to too much talking and not enough paying attention and tacked on a bonus mile+, so I knew to be on the lookout for the turnoff, which is totally marked. My husband rode with me from mile 10-ish until we hit some huge downed trees just before mile 13, and then I was solo again until Harlan (mile 30). I stuck with the hiker's route the first half, doing the single track at the base of Mary's Peak. Other than the downed trees at mile 13, the trails and roads were in good condition until the single/double track section dropping down to the gravel road that takes you into Harlan. Here you could see plenty of evidence of the recent storm, as I had to crawl under and over numerous downed trees. Before starting we decided I would make the call in Harlan on which route to take the second half. Right after Harlan, the route splits into a hiker or biker option. The hiker route includes a lot of new single track (this is the way I went last year) and the biker's route was all roads (paved and gravel). We were worried that the recent storm might make the trail section unpassable, or at least frustratingly slow. If I was running with someone else, I would have opted for the trail route, but I was worried going solo that I would get started on the hiker route find myself spending a lot more time navigating downed trees and I did not want to finish alone in the dark. It is hard to access the hiker's route for any crew because there is a lot of private property bordering the trails. There is also a one-mile section of trail that is closed right now until the end of Feb for wildlife protection. Seeing all the downed trees leading into Harlan helped convince me to go with the bikers' route to be safe. This way Josh (my husband) could also accompany me on the bike. My parents met us in Harlan with our kids so we could see them, and then my dad could take our truck to the beach. I spent a little more time here than necessary, but they were late arriving (because with kids, everything takes longer) and although I had the FKT in mind, I was really out to enjoy the day and have an epic run.

I left Harlan solo while Josh helped get everyone situated and pass off our vehicle, and then he caught me a few miles later on the long paved climb. Every time I saw the singletrack cross the road I would look wistfully at the trail, as I definitely enjoy running trails more than roads. The only incident of note these last 26 miles was around mile 46 when two guys in a truck warned me about "creepy guys" camping at the bottom of the hill I would have to run by, but luckily Josh turned around and rode back up to me to accompany me through the camp.

Once we hit the paved road that would take us to Ona Beach, we called my dad so that he could meet us at the finish with our truck. Although I felt a lot better overall last year when I ran this (I am sure having company the whole way to keep you distracted helps), I finished this year feeling better. The hiker route gains several thousand more feet and is longer, so overall it is a harder route.  I love the views that you get on the trails, which you don't get as much with the biker route. Regardless of the route you take, I think it is an epic run to be able to travel over the coast range by foot. I hope that putting in a female time encourages other women to get out and complete this route (or the hiker version). Just a side note, if I were to do this trail solo, I would feel more comfortable doing the hiker route the entire way since it does not have nearly as much road access. Personally, I feel more comfortable in remote areas on trails versus roads.

For years, we would hear rumors about this trail coming to fruition. Thanks so much to all the volunteers that have worked so hard to create this route and to the landowners that were willing to let the trail border their property. The trail is EXTREMELY well marked. Although I had the track on my phone, I never needed to look at it more than to just verify I was still on the right roads. I recorded this run using my Coros and my Garmin InReach, set to 10 min increments (which loses mileage but shows the route, and I carry for safety as well as verification). I was accompanied in parts with my husband and witnessed by my family at mile 30 and my dad at the finish.

My running partner and I are super impressed by this. 20% faster than the old FKT and in full mud season and downed trees.