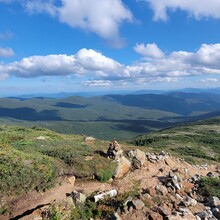 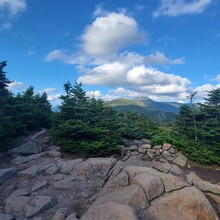 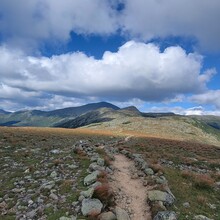 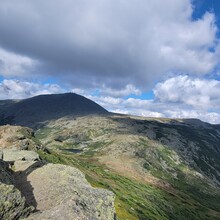 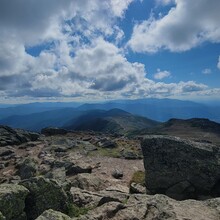 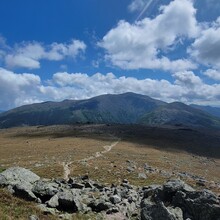 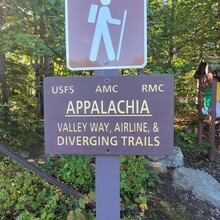 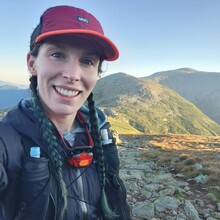 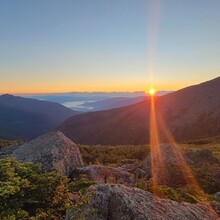 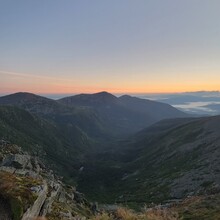 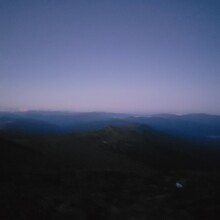 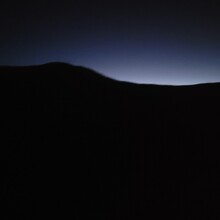 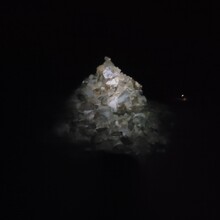 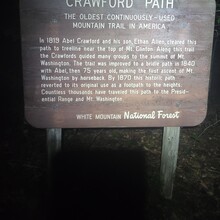 On Sunday August 28th I set out at 2:14am going in a north bound direction on Crawford Path. It was a beautifully clear night sky with hardly any wind. The forecast for the day actually looked quite tranquil, so I was hoping it was stay that way.

The dark miles both went by quick and slow at the same time. Even though I've been on these trails many times it's amazing how different it looks with just the light of a headlamp. As I ascended Washington the sky was beginning to come alive with some of the most beautiful fiery colors I have ever seen. It began to get a bit chilly so I added on a shell over my light hoodie I was already wearing and a pair of light gloves.  When I reached the summit I was greeted with about 100 others taking in the sunrise as well. I quickly filled my waters at the spigot and ran away from the crowds.

From there over the Mt. Clay loop it was back to quiet trails. The lack of sleep began to catch up with me a bit. At one of the many trail intersections I continued to follow the Gulfside Trail, the correct way, and soon convinced myself I was going the wrong way. So I booked it back to the intersection and started going down Randolph Path. Luckily I didn't make it far before I snapped out of my stupid confusion and ran back to where I was going in the first place, the correct direction all along.

Soon I began to encounter a bubble of people doing southbound Presidential Traverses as I was going over Adams. It also began to warm up a bit so I was able to shed my layers I had put on earlier in the day.

After summitimg Madison, descending Valley Way was a little tedious at times. The trail had lots of running water and slick rocks. The descent felt good because I knew I was about to spend a ton of time ascending all of this all over again. I decided instead of taking a break in the Appalachia parking lot, I would quickly just tag the sign and turn around before I could think about quitting. This strategy worked quite well. I took a quick break up the trail to get my headphones in and a snack to eat while I began the grueling ascent back up. The humidity was thick down low which really gave me the motivation to get back up to the alpine zone where I knew it was much cooler. It was painfully slow grind climbing back up. I knew this would be the most mentally tough part of the day for me and it was. It felt like a century later, but I finally got myself back up to Madison and just sat there for a few minutes contemplating my life choices. I looked toward Washington and beyond to where I was heading. I had done a southbound traverse many times and knew what to expect now. I just had to get my body there! I stopped quickly at the Madison Hut to fill my waters at the spigot and onwards I went. From there to Washington it's kind of a blur of slow climbing and shoving calories down my throat.

Once atop of the Mount Washington zoo of humans I quickly tagged the summit sign while apologizing for ruining some tourists photo and ran to the spigot. It was overwhelming how many people were up there. I ran so fast to get back on the trail where there were even more tourists just standing in the middle of the trail with their flip flops and cotton sweatshirts. This helped me make quick work getting down to Monroe.

From Monroe on the trails began to quiet down. I saw just a few thru hikers and some day hikers finishing their day. I began to feel the excitement of me finishing my day as I got over Eisenhower and continued on to Pierce. As usual, it was pretty quick to the Pierce summit. I was so stoked when I got there. Looking at where I had been that day, not once, but twice.

I did my best to try to send it down Crawford Path, but it didn't dry out much that day and it was still mostly running water. Everything hurt and it was super painful getting myself down there. I was probably a bit too careful in some areas. Being as tired as I was I knew I was more likely to trip over something stupid and fall and hurt myself, which wasnt really how I wanted to end the day. It felt like forever, but once I heard the road noise I ran as fast as I could back down to 302 where I stopped my watch.

I had been thinking about doing a double traverse for well over a year now. When Whitney set down a good time last year I knew I needed to try to go for it eventually, even just to see if I could survive it. It's an intimidating day. I had never done that kind of elevation gain in a day prior to this. This was so fun and I couldn't have asked for better weather for this day. I carried all of my own food, water, and supplies for the entire day.

Hope to see some other ladies go after this. Lots of room still left on the table for time. I would suggest not doing this on a weekend day like I did. I think it would help considerably since I spent a lot of time waiting for others to move and going around them.