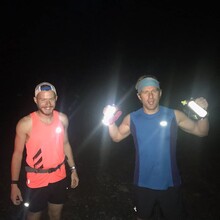 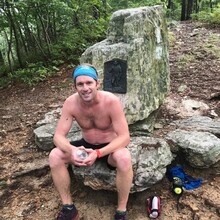 Today, Brett and I, attempted the FKT of Scott Lesh, Rim to Rim, from Darlington Shelter to Center Point Knob. To consider this unsupported Brett carried his Mountainsmith fanny pack with 1.3 liters of Tailwind along with his 12 oz Nathan handheld, also of Tailwind. I carried two Nathan 18 oz handhelds filled with my DIY power drink of green tea, coconut water, maple syrup, honey, sea salt, lemon and lime. We were dropped off at Miller's Gap by Nate at 05:30 and walked to Darlington Shelter.  It was dark and we were scared of rattlesnakes so we used Brett's phone as a flashlight. We tried to ensure we did not wake up the campers so we quietly sent a text to Nate before we started at 06:08. Nate took pictures of us along the way and also waited at the top of Center Point Knob for us to complete the 16.6 mile run. I made it to the top first and ran around the Center Point Knob rock to ensure the Strava segment was completed. FKT accomplished. After reading the posts about where the official start is I trimmed the segment and created a private segment where it starts at the crossroads of the Darlington Trail and the AT to figure out my FKT time instead of using the Strava segment already created which starts at the Darlington Shelter. What a day! Thanks to all previous FKTers for inspiring us to do this route and thanks to my trail buddies Brett and Nate for being wicked awesome.