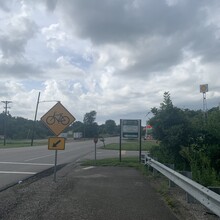 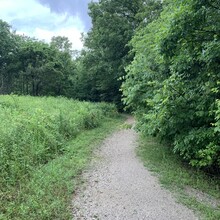 The description of the route is very accurate. I started on the south end in Park City at the little stop sign by Dollar General (photo included). I think the route is probably easier started on the south end because you can finish downhill (although it was so humid and I was so severely dehydrated and cramped up that the downhill running wasn't pleasant anyway). At one point, I think roughly 6.5 miles in, the trail diverges and you can either go straight or take a hairpin, downhill turn to the right. You are supposed to turn here--I learned the hard way that going straight eventually leads you to a small old cemetery. Other than that it's pretty straightforward and easy to follow! I recommend trying this out on a day when the dew point isn't a million degrees, but that's just me.