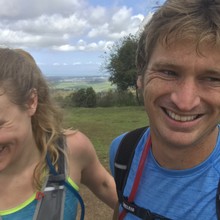 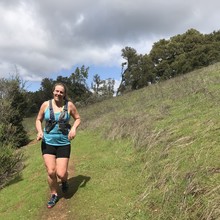 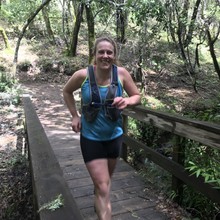 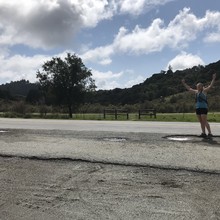 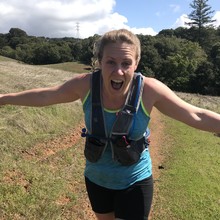 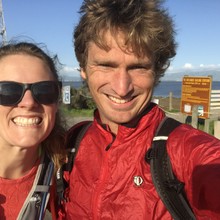 It was a beautiful Saturday. We biked to the bay and started running to the sky. During the first half of the run, Becky ignored my discussion of our pace and potential for FKT. Instead we focused on the pretty flowers and verdant forest. We took our time at the ranger station in Foothills Park and leisurely ate our bagels. After a final climb, we arrived at Skyline drive 4 hours 15 mins after leaving the bay- slightly behind what I thought we needed to get the FKT. Nevertheless inspired, we turned around, pounded some Gu’s and started back down. We chatted about life and troubles and I pretty much gave up on breaking 8 hours, but Becky had a lot of steam in the engine and pushed the pace downhill pretty fast. As we approached the ranger station, I realized we might have a chance and quickly filled our water. We still walked up the steep section right after the ranger station and then hit some 9-minute miles going through Arastradero and the FKT was possible again. We died a bit after that but second-winded once we got back into Palo Alto. With 5 miles to go, we knew we could make it under 8 hours unless catastrophe struck. At this point, Becky finally got psyched and I had trouble keeping up. We cruised the last couple of miles in and got back to the sailing station with some time to spare.
Overall, an amazing run. The first half was relaxed and no pressure. The second half was cruising downhill with intermittent thoughts of sugarplums. We really enjoyed seeing the difference in the water level of the bay from the beginning to the end of the day.