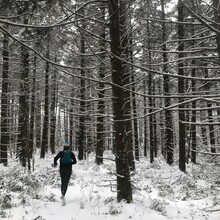 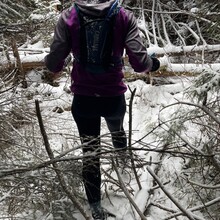 We (Anna and Becky) were drawn to this route because of the mountain's prominence and mysterious nature, and we were interested in incorporating a challenging bushwhack into one of our runs. We carried all the water and food we needed on this route, and were thankful to have gloves and hats and outerwear for the summit even though it felt like a balmy 48 degrees at the start. There were many stream crossings early on, however, and we realized that dry feet were not an option.

At the base of the mountain, sleet ended, and the sun began to peer through the clouds. We ran up a trail whose only traces of snow were frozen clumps gathered at the shaded base of some large trees. We splashed through some small streams to a major, slippery stream crossing. This was about where the snow line began. It started out as a quarter inch dusting and increased with elevation.

Often, the sun would duck behind clouds and it would start to flurry. The trail became steeper, and the snow became steeper. About 4.5 miles into the climb, the clouds took over, and the trail became a stream as the elevation leveled out. It felt like 28 degrees here, and the wind picked up, snow pelting us in the face. At a little over 5 miles, we began our bushwhack, weaving in and out of trees and brush that began to grow closer and closer to each other. Jumping over fallen trees with thick branches while squeezing through shoulder to shoulder red spruce was a challenge, as was navigation. There are no consistent markings, and the incline does not provide an obvious way to the top.

Eventually, we reached the frozen summit marker sticking out of the 4-5 inches of snow. Brushing it off, we snapped a photo, and headed back down the mountain. It was so cloudy at the top that it was hard to imagine that there could still be more visibility at the bottom. But we know how tricky the weather can be in this area, as locals often warn hikers.  We wound downhill, watching the depth of snow decrease gradually and the clouds recede. The snow continued to fall then blow past hinting at the possibility of sunshine. It was a beautiful and adventurous afternoon. All in all, we are thankful we did not have to worry about rattlesnakes, briers, and stinging nettle at the top. Unpredictable snowy April ended up working out well for us.