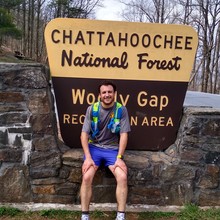 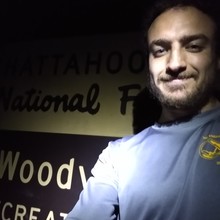 Today I established a new unsupported FKT on the Georgia Loop - following the current DRT route, not precisely Rick Schick's original route. Gear and systems are at the bottom if it helps future runners.

A quick thanks to Jack Pilla who coached me for the winter, and to Rick Schick, who shared his ultra stories with me on a shuttle bus to Cheaha 50k (his 14th or 15th time running it?). He was the inspiration for me to try the Georgia Loop.

This season I was training for GDR, and I travelled to GA in February, living out of my car and falling in love with the Chattahoochee forest. When all the races were cancelled/postponed this season, I knew I had to give the Georgia Loop a shot before heading home to celebrate my awesome experience. My biggest 5 training weeks for GDR were mostly on the course or local forest roads, with 70mi per week and 11k of gain on average. I ended up knowing the DRT like the back of my hand and camping in some truly beautiful spots - the top of the forest road at Sapling Gap in particular was my favorite.

I began the run just before 3AM because hot weather and then T-storms were forecast for the PM. I ran CCW from Woody Gap. The darkness was only a minor challenge, and may have actually prevented me from going out too hard. Weather was warm (for a Vermonter), humid and breezy. At 2.5 hr I was atop Coosa, and at 4 hours, I was ascending out of Mulky Gap to the most incredible sunrise. Pink, purple and red extended all across the horizon in huge bands and the clouds cleared just enough for me to see the rising crescent moon. (!!!) At around mile 22 I bonked a bit, and came back by mile 28. When I hit 30 miles at almost exactly 6hr, I couldn’t believe I had managed to get there so quickly. I decided to push to see if I could match Ben Mercer's time, even though he had a slightly tougher route on the original DRT. The last 10 miles were kind of brutal since I was getting heat exhaustion with some stomach pains, and so my pace slowed at the end. I think keeping my filtration/pack reshuffle stops quick was instrumental... I was stopped for about 15min total. Other than some nasty bumps of my L big toe, one minor fall and two blisters, I came away relatively unscathed! I will be going from 9 toenails to 8 after this adventure.

Lots of very friendly hikers out. An incredible route.

I carried all my supplies and filtered water at Slaughter Creek, Mulky Gap, Point Bravo (route 60), Long Creek, and a top off at Justus Creek. My water system was to combine Aquamira chlorine drops in a tube 5-10 min before hitting the source. Then they're ready to go into my bladder, and I pour a second set of drops for my hip bottle so they bind while I hike away from the spring. Even with a little pack reshuffle, the transitions are very quick.

Sir Benjamin MacGruff, Keeper of the Legend of Beartown

- Hydration vest and also belt, mostly held 32oz in the former and 16 in the latter after each refill

- Hanky for mopping brow; sucked sweat out of it occasionally which was quite nice

- A cup of VT maple syrup divided in travel bottles - 800

Hopefully that helps future runners. This is a gnarly route!