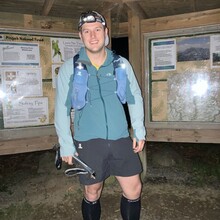 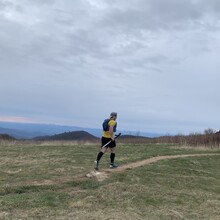 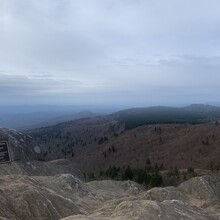 This is my third attempt at the trail and the first time I've gone from North to South. I thought that starting at the higher elevation and having most of my vert done in the beginning would make the rest of the run more manageable, unfortunately this trail feels like it is uphill the entire time. I did this run solo and unsupported starting around 5am, carrying 3 soft-flasks (one with a filter to collect water from streams), 10 honey stinger gels, and 3 peanut butter and jelly sandwiches. Water is frequent enough, the only reason I ran out at the end was due to poor time management and less than ideal decision making. I'm pretty new to ultra running, haven't competed in a race yet, so nutrition is something I'm still figuring out as well. I think I ate frequently enough and had the right things, but I could have benefitted from more food and a better diet coming into my attempt.

I felt strong and thought that I was moving at a good pace coming over Black Balsam. I did a lot of power hiking but ran any flat spots or downhills that I found weren't too uneven. Unfortunately my attempt started to fall apart around 14 miles in, I was experiencing a lot of cramping and had to stop frequently to stretch, and by mile 17 I was having pain in my hip that prevented me from running.

My time is not impressive, and I definitely overestimated my fitness. I hope someone will beat my time in the near future so I have some strong incentive to train hard and give it another attempt.,