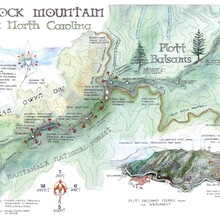 As far as I am aware, the first attempt at this trail was by myself and two friends on June 6th, 2020.  We had decided to join the Blackrock trail starting at Pinnacle Park in Sylva with the South Beyond 6K route starting at Waterrock Knob.  Beginning from the Pinnacle Park parking lot the route would take the East Fork toward Blackrock Mountain.  It would then continue to Yellow Face, down and across the parking lot of Waterrock Knob, and continue past Browning Knob, Mount Lyn Lowry, and terminate at Plott Balsam Mountain, the end of the trail.  We would then backtrack the entire route.  I scoured the internet for some time to find any writing, account, or gps data of anyone having attempting this route and came up with nothing.

June 6th 2020, we made it to Plott Balsam.  However, on our return trip we ran out of water before heading back up Waterrock.  We bushwhacked south to the Mountains to Sea Trail and obtained water, but in the spirit of establishing a FKT route we had not stayed true to the course and thus we did not submit it.  Of note, there were two routes to Blackrock at the time.  Strava from 6/6/2020: https://www.strava.com/activities/3575135547

February 20th 2021, we attempted the route again.  It was extremely cold and we discovered a reroute to the north of Lyn Lowry that added significant time and about 600 extra feet of elevation to the trip.  By the time we reached the Lyn Lowry cross, we decided to turn around.  Strava from 2/20/2021: https://www.strava.com/activities/4820427165

May 15th 2021, I attempted the route unsupported and solo.  I left at 7:30am and made my way up the East Fork toward Blackrock.  I took the new trail (they have since closed the old one) to Blackrock.  The route stayed the same as it had in the past, and the Lyn Lowry reroute is still in effect and will be for the foreseeable future (there is private property that the trail used to cut through, the owners re-routed it sometime between our first and second attempt). I reached Plott Balsam at 4h 30min and turned around for return journey.  In total it took 9h 3min.  I hiked uphills and tried to run most the downhills, however most of the route is technical terrain.

WATER AND RESUPPLY: There is plenty of water for the first 3 miles of the route.  The last water comes from a small pipe 3.2 miles into the journey, just before summiting Blackrock.  From that point on, there are NO RELIABLE WATER SOURCES.  I brought 3L and did fine on a mild day in May with highs in the 60s.  As far as I know there is no running water at the bathrooms at the Waterrock parking area, however, if you are self supported/supported it is a great place for friends to meet you or leave a car the night before.  We did this on the first attempt in 2020.

I am happy to offer any beta on this route!  Please contact me with questions!