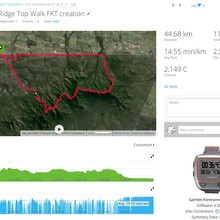 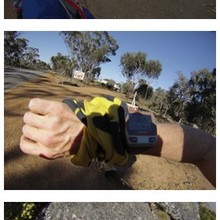 On Wednesday 4 November 2015 I set out to create an unsupported FKT route of the Stirling Range Ridge Walk (also known as the "Ridge Top Walk/RTW") in Western Australia. The loop is about 43km + 2500m gain. Attached includes a screenshot of my Garmin 310XT file - it reads as just over 44km + 2569m. My Garmin e-Trex (with barometric pressure) registered closer to 43km + 2513m, which I would consider more accurate.

The loop start/finish is the corner of Bluff Knoll Road and Chester Pass Road. I ran up Bluff Knoll Road, then did the run/hike/scramble across the ridge, along the one and only route (outlined in AT Morphet's 1996 guidebook and also available on the 'walkgps' site). Given the thick bush and cliffs, it would be nearly impossible to shortcut anything on the ridge. At the eastern-most peak, Ellen Peak, I signed the register, then headed down to the northern national park boundary fire trail, which I then ran westerly back to Chester Pass Road.

My gpx file indicates my route-finding challenges in a few places, where I lost the trail in dense bush or on granite outcrops/rock ledges, and had to backtrack. I also stopped several times to try to build more cairns to help future RTW'ers.

I travelled solo (as is the expectation for unsupported efforts), starting about 5.11am and finishing about 4.18pm. 11 hours 6 minutes 27 seconds. I carried a SPOT tracker and have screen shots saved, though the SPOT ripped off my pack 8.6km from the finish (along the fire trail) and I retrieved it the next morning. There were 3 male multi-day hikers travelling in the opposite direction to me I encountered near Moongoongoonderup Hill and they were the only people I saw.